- September 18, 2017
By Breaking & Follow-up News Reporter
A youth group in Abia state known as Umuahia Youth Movement has on Sunday issued a twenty-four (24) ultimatum to the state governor, Okezie Ikpeazu, to dethrone and strip one King Israel Kanu, of his title as the ruler of Isiama Afaraukwu in Umuahia. 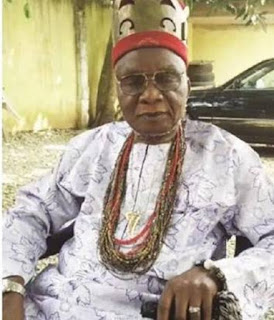 The embattled king is the father of Nnamdi Kanu, who is the leader of the now proscribed Independent People of Biafra (IPOB).
Kanu' IPOB is currently seeking for self actualization and secession of the southeast region from Nigeria.
Last week tension went high in the country as soldiers and Nnamdi Kanu-led IPOB locked horn with soldiers. Lives were reportedly lost and security buildings were burnt down as the IPOB members insist the soldiers routine operation python dance was targetted at their members.
Amidst widespread mix reaction from Nigerians, the military later labelled IPOB a terrorists organisation. Some section of Nigeria especially from the southeast had faulted the military declaration saying it had no powers to proscribe any group.

To quell the rising tension, the Governor of Abia state, Ikpeazu, had earlier declared a dusk to dawn curfew in Umuahia.

This was later followed by high level proscription of the group by the Soitheast Governors Forum, whicj argued that the activities of IPOB must cease as its leader has losy control of his members who have gradually become wild and a threat to the socioeconomic and political development of the region.

This proscription was greeted with an avalanche of mixed reactions within and outside Nigeria. But the Southern governors forum led by Delta State's Governor Dave Umahi insisted that IPOB has derailed from its earlier declared non-violent ideal to a force capable of injuring the civil peace in the region.

While the IPOB adherents are battling to come to terms with their ban, the Umuahia Youth Movement came up with an ultimatum seeking the governor to unseat Nnamdi Kanu's father.

The 24 hours ultimatum which is likely to expire anytime today , Monday 18th September, 2017 was issued in a letter addressed to Governor  Ikpeazu and copied to Nigeria's President, Muhammadu Buhari.
The group warned that failure  to dethrone King Kanu force them to rise against the government and do the unlikely.
The Movement insisted that King Kanu has failed in his duty as a leader and custodian of tradition because he  "could not call his son to order".
The ultimatum letter which was made public by the group's President, Ifeanyi Okwudili read:
"With tears and sorrow, the Umuahia Youth Movement respectfully write to request the dethronement of Nnamdi Kanu's father as a traditional ruler of our clan.
"It beats our imagination that a man who calls himself a royal father and an elder could not call his son to order but rather encourage him in his madness that has plunged Umuahia city to a great crisis today.
"Sir, recall that Umuahia has been the most peaceful capital city in Nigeria to live and do business but just because of one man, we are today facing the wrath of the federal government of Nigeria.
"Our shops, markets, schools, churches and all banks have been shut down. For the past three days, we have been indoors for fear of being attacked by the military just because of one man whose father is our traditional ruler.
"We appeal to every well-meaning Nigerian as well to prevail on governor Ikpeazu to as a matter of urgency dethrone Nnamdi Kanu's father."
Against the call by the Southeast Governors Forum, that the military Operation Python Dance be suspended, the Umuahia Youth Movement said it wants the continuation of the military exercise (Operation Python Dance) "as an attempt to withdraw will make the IPOB criminals rob our shops and houses".
"Sir, we assure you that we remain one Nigeria and will join hands with you to make our country Nigeria and state Abia the best among all the countries of the world", the letter concluded.