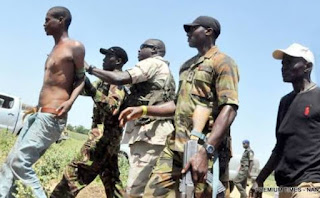 By Breaking & Follow-up News Reporter
Gunmen suspected to be Boko Haram on Sunday attacked a village in Magumeri local government of Borno state where they slaugteref five residents including an Islamic cleric, sources said.
Magumeri is the town where Boko Haram insurgents recently attacked a team of oil exploration scientists from the university of Maiduguri during which killing six and holding unto three as hostages. The abductors wanted Nigeria government to negotiate the release of the abducted scientists who have spent wrll over two month in captivity.
Caretaker Chairman of Magumeri Local Government Area, Abubakar Abdulkadir, confirmed to journalistson phone that the atrack took place in Kurmiri village of Titiwa Ward, on sunday night.
The attacked location is about 15 kilometres away from Magumeri.
He said Chief Imam of the village, Ustaz Goni Bukar Tabare is the Senior brother to a popular Politician in Magumeri, Mallam Goni Kundube.
He said the attackers crept into the village at night all armed with Ak47 rifles, knives and matchets.
"We in Magumeri woke up this morning (Monday) to recieve a distress call that one of our Community was attackef by Boko Haram", said Abubakar.
"Fve people were slaughtered including Chief Imam of Kurmiri village. We regreted this attack and we Pray Allah (God) grant Aljanul Firduas to the souls of the deceased and their families to bear the irreparable loss.
He said the attackers didn't escape without a counter response from the team of youth vigilante guarding the locality. He said the volunteer security group popularly known as Civillian-JTF were able to arrest one of the attackers.
"I want to commend the effort of our Civilian JTF members, security agencies for their prompt action which led to the apprehension of one of the attackers.
He called for calm in the area.
"I also want to urge members of the general public not to panic, but go about their businesses as the situation is under control", said the council chairman.