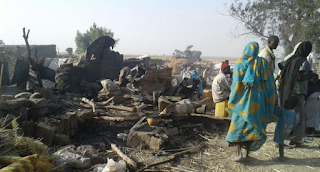 Amidst tears, residents of Daima village in Kala Balge local government area of Borno state on Thursday bury nine of their beloved ones who were slaughtered by attacking Boko  Haram insurgents on Wednesday.

Daiman,  a border community near Cameroon is just a few kilometres away from Rann, the headquarters of Kala Balge where Nigeria airforce fighter jet, on January 17th, 2017, mistakenly dropped bombs on displaced persons  in a camp. At least a hundred persons were reportedly killed. The attack was described as a mistake on the part of the pilot who did not get the correct coordinate on the location of Boko Haram fighters that were said to be gathering at a spot not far away from the IDP camp in Rann.

Hundreds of the villagers who escaped the attack fled into Cameroon. Many who made it to the IDP camp in Rann are currently being treated of various degrees of wound by medics stationed in the camp.

Chief Imam of Rann, Ba'liman Goni Guja , informed journalists on phone that they  had to wait for the military to help them pick the corpses because they could not go back to the attacked village.

He  narrated that the victims were attacked while they were working in their farms  at about 10 0'clock in the morning .

He said said most of the IDPs in Rann who could no longer cope with the insufficiency of the food ration being offered them in the camp have decided to go outside the camp to farm and produce foods to supplement their feeding in the camp.

The Imam said many of the villagers who went out to the farm are yet to be accounted for.

" Many people are still to be accounted for, but the soldiers have released 9 corpses, which we buried this morning." The Chief Imam said.

But there is a unanmous fear amongst the relatives of the attacked IDPs that the figure on death casualty could be higher than what is being reported.

Mommodu Bashir, a trader in Maiduguri spoke BnF News Online said he has relatives who are in the camp and he fear they could be in danger.

"I have not heard from them since Wednesday", said Bashir. "We normally communicate sometimes through the Cameroonian telecom because they are closer to the border. I doubt if it was only nine persons that may have been killed. We learnt that some that managed to escape back to Rann had dagger and gun wounds on their bodies. We pray the others that are yet to be found are safe".