After attending to a record figure of 6,627 cases of Cholera with 48 killed by the disease in Borno state, Doctors Without Borders (MSF) said it has to scalescale up its operation in order to tackle fresh cases of outbreak in the war wrecked state. 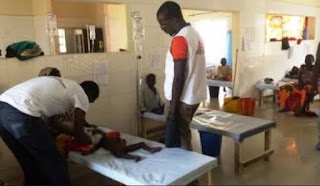 Most of the cholera  victims are from IDP camps which suggest poor state of hygiene in the camps.

Boko Haram had displaced over two million people from about 20 local government areas of Borno state a d half of that figure live in camps.

Witj the torrential rains being observed this year it is likely that the camp managers may not have been able to manage sources of water that may have been contaminated with flooding rain waters in the open camps.

The Borno state government launched a general immunisation for cholera on Monday in Muna IDP along Maiduguri-Gamboru road. The aim waa to tame the wildly spread of the epidemic into the city.

But MSF said state capital of Maiduguri alone has witnessed 1425 cases, while 600 cases in Dikwa and 602 cases in Monguno have so far been reported.

MSG alerted on Sunday that new cases of cholera emerge from Monguno, Dikwa and other parts of Maiduguri.

"As cases increased in Maiduguri, we rapidly added more beds to our cholera treatment centre in Dala, where we now have 100 beds."

MSF said a total of 491 patients were admitted and 475 discharged in Dala since 16 August when the oubreak occurred.

MSF has constructed another cholera treatment centre with a 50 bed capacity near Muna garage camp located at the outskirts of Maiduguri, which it said can be increased to 100 in the coming days, if required.

Muna Garage camp hosts about 20,000 people who have been displaced by the ongoing conflict between the Nigerian armed forces and Boko Haram.

A stayement issued by MSF Borno office field communicatio officer, Musa Yahaya, indicated that "the outbreak has now begun to spread throughout other camps in the surrounding area and inside the city".

Oral rehydration of sugar and salt solution are being provided at the rehabilitation centres to help patients overcome severe dehydration.

Yahaya said other patients arriving the camp with critical condition are taken directly in MSF ambulances to the cholera treatment centres.

But as authorities and humanitarian actors tackle the outbreak in Maiduguri, numbers of cholera cases have been increasing in Monguno and Dikwa, towns to the east of the capital.

Monguno is home to about 200,000 people, two-thirds of whom are people who have fled other parts of the state and now live in official and unofficial camps. Dikwa, a military controlled enclave is home to approximately 120,000 people, out of which 100,000 are internally displaced people.

"We are worried that the number of beds currently planned may not be enough as cases continue to rise in the town."

MSF is closely coordinating its efforts with the Borno Ministry of Health, the World Health Organisation (WHO) and other humanitarian organisations in the prevention and treatment of cholera, including providing training for their health workers.

"Our facilities operate 24 hours every day, and are free of charge. People with symptoms of cholera – acute watery diarrhoea or three or more loose stools per day, and dehydration - should seek treatment immediately, said Dr. Félix Kouassi, MSF medical coordinator.

"We remain alert and through our community health workers continue to monitor the spread of the outbreak, and respond to it across Borno state."

Besides Borno, MSF is currently responding to cholera outbreaks in eastern Chad near the Sudanese border, in multiple locations in the Democratic Republic of Congo and throughout Yemen.

Borno state and largely the northeast Nigeria where Boko Haram activities were endemic may likely, in its post-insurgency days, face these kind of epidemical spread of diseases even in communities once controlled by Boko Haram. A gloomy future that calls for proactive medical plan in  government's post-conflict  efforts.