A Boko Haram member that is on the wanted list of the Nigeria military has been arrested by the police in Ondo state.

The arrested Insurgent, Idris Ibrahim Babawo, aged 42, is the number 156th on the  list of Wanted Boko Haram member published by the Nigeria army.

Spokesman of the Nigeria Army, Sani Usman, a brigadier general, confirmed the development in a statement issued to the press.

General Usman said the arrested suspect was nabbed at about 2pm on Sunday 24th September 2017
by personnel of the Nigeria Police in Ondo Stateon.

He further revealed that
the suspect who known by two nicknames - "Idoko" and "Nagada".

"He is believed to be on serial number 156 on the wanted Boko Haram terrorists list", said General Usman.

"He was handed over to the 32 Brigade, 2 Division, Nigerian Army, at about 2.00pm today Monday 25th September 2017 by the Ondo State Command of the Nigeria Police.

"He escaped from the North East due to military onslaught on the terrorists with a view evade arrest and prosecution. But nemesis caught up with him", said General Usma, the director army public relations.

Many Boko Haram fighters have escaped the military onslaught in the northeast of Nigeria to various parts of the country especially the south. 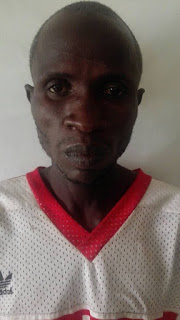