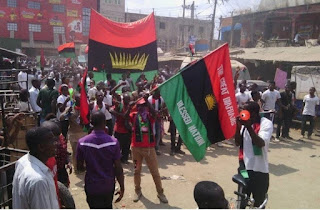 Southeast Governors Forum said they decided to proscribe the Indigenous People of Biafra (IPOB) because  the group was gradually degenerating into violent a one and causing tension in the zone.

Chairman of the Forum and Governor of Ebonyi State, Dave Umahi, told journalists at a press briefing in his office in Abakaliki that the group had gone out of control and even the leader of IPOB, Nnamdi Kanu, was losing control of his members.

The governor said their decision to outlaw IPOB  was to prevent further bloodshed.

Governor Umahi said "IPOB has lost its original ideals" as their activities now cause "unnecessary tension and killings in the South-east".

He explained that the Forum had copious evidence before them that faulted the claims of the proscribed group's leader,  Nnamdi Kanu, who said the military went to attack his men. He said it was the IPOB members that instigated the attack.

"When you put a small fire, it can go very far and become difficult to control", Umahi said.

"The IPOB activities were gradually getting out of the control of Nnamdi Kanu. Soldiers were passing on the way when IPOB members started throwing stones and other objects on them and it sparked off the clash between the group and the military.

"It is a shame that when this thing happened, a man called Charles Ogbu had to send phone numbers of all South-east governors, the Senate President and others and all our people could do was to be calling us to insult us. These are people who never experienced any war in their lives."

Mr Umahi noted that one of the primary concerns of the southeast govsrnors' forum was securing the lives of the northrners and non-Igbos living in their domain.

"Our focus is how to save lives of every Nigerian and we believe in a united Nigeria. Lives of people are involved and we must not play politics with that," he said.

"Anybody that wants to foment trouble must be crushed and I want security agencies to beef up security around all the non-indigenes in the state and to report to me any problem because we must maintain the peace."

He also said his forum takes exception to  the group's members insulting President Muhammadu Buhari and leaders of the country.

He further noted that  "majority of the Igbos do not want secession from Nigeria" but they crave for fairess and justice in the county.

"That is why we are all talking about restructuring, there is no part of this country that is not feeling marginalised somehow and that is why all the zones are setting up committees on restructuring," the governor said.

The Governor hoeever added that the quest for justice or or cry against marginalisation "should not be a reason to talk about secession". He said "dialogue should be the best way to resolve and redress all differences".

He also dispell the insinuations that operation Egwu Eke II (Python dance II) was targeted at IPOB; according to him the military exercise was meant "to curb rising incidents of crime especially kidnapping and armed robbery in the state".

The briefing was attended by other governors of the southeast states, senators of the region led by deputy senate president, Ike Ekeeremadu, security chiefs and some elders of the Igbos.

IPOB members had last week clashed with military operatives carrying out show of force parade which is part of the Operation Python Dance II. A situation that later snowballed into shooting by the aggrieved soldiers who also crossed the line by invading the NUJ centre in Umuahia during which some journalists were reportedly molested. The military later apologised even though the national secretariat of the NUJ had demanded for unconditional apology and punishment of the culprits.

The IPOB members also attacked security officials who were injured in while a police station was also burnt.

Nnamdi Kanu led-IPOB wants an independent country of Biafra through a referendum. But the the inconsistency of its leader's demand made it difficult for the public to understand exactly what exactly the agitation was all about.

The Nigeria military had earlier pronounced IPOB as a terrorists group citing the country's anti terrorism law which it said the self determination agitators had breached.