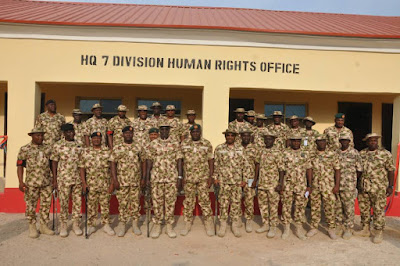 The office is located within the Brigadier General Maimalari barracks where the headquarters of the operation Lafiya Dole is located.

The Human right office is amongst other building projects that were executed by the army through its direct labour initiative.

The Nigeria army had in February 2016 announced the setting up of a human right desk at its headquarters where issues of alleged rights abuses by soldiers during any military operations could be handled.

The need for a Human Rights Desk in the Nigeria army came up amidst wild accusations that soldiers prosecuting the Boko Haram war in the northeast Nigeria have engaged in several cases of human right abuses.

Civic rights groups like Amnesty International has been relentless in its exposure of human rights abuses allegedly perpetrated by Nigerian soldiers in the country's war against Boko Haram and the military's ruthlessness in quelling protests in other parts of Nigeria.

The organisation's latest reports stated that 240 people including infants died in a dreaded military detention centre in Borno in 2016 while 177 pro-Biafran agitators were extra-judicially killed same year.

But the Nigeria military had in a statement signed by acting director defence information, Rabe Abubakar, a brigadier general, described the claims in the said report as a continuation of AI's "series of spurious fabrications aimed at tarnishing the good image of the Nigerian military."

Commissioning the building projects which also comprise the Corporal and Below Quarters, Senior Non-Commissioned Officers Quarters, Single Officers' quarters, Married Officers' Quarters and a Hospital Ward, the Army chief said the initiative was in line with Mr President's efforts towards addressing the acute shortage of accommodation in the Nigerian Army, in order to boost the morale of troops as they strive to surmount the daunting security challenges in Op LAFIYA DOLE.

He said the project "are meant to provide decent living accommodation for officers and soldiers and their families as well as conducive office environment to execute your tasks efficiently.

He urged the beneficiaries to make judicious use of the facilities while remaining focused in their tasks to consolidate the military  achievements in the country so far.

"The Nigerian Army under my direction will continue to provide you with the requisite welfare and logistics to enhance your efficiency in the discharge of your constitutional responsibilities.

"I wish to reiterate here that the execution of these projects could not have been possible without the support of the Federal Government which has remained fully committed to the provision of welfare and logistics support for the Nigerian Army to perform its roles professionally. I therefore urge you to remain loyal and be reassured of the unflinching support of the President, Commander-in-Chief and the entire nation.