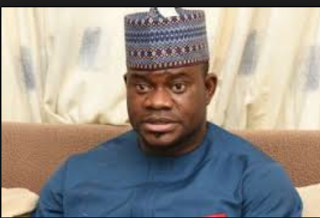 Governor of Kogi state,  Alhaji Yahaya Bello, on Wednesday sent out words of empathy to the girls affected by the ongoing Boko Haram conflict in northeast Nigeria.

The governor spoke from Lokoja, the state's capital during an occasion marking the 2017 edition of the International Day of the Girl Child.

A statement issued by the governor's chief press secretary, Mrs Petra Onyegbule, indicated the governor's pledge of commitment to always stand for the girl-child by way of empowering them especially through quality education.

"As the World Marks the 2017 International Day of the Girl Child (IDGC), the Governor of Kogi State,  His Excellency,  Alhaji Yahaya Bello, pledges his commitment to Empower the Girls child before, during and after conflict", the statement reads.

"Governor Bello says he is not unaware of the myriad of issues that face the girl child in today's society during peace and in times of conflicts.

"As a father and a governor, he is aware of the need for the girl child to be EmPOWERed for life especially during conflicts through information and education and says his administration will continually seek ways to ensure this objective is achieved in collaboration with relevant agencies within and outside the country.

"He uses the occasion of this year's commemoration to reflect on the plight of girls in IDP camps in the North East and the psychological trauma they have suffered over the years as a consequence of terrorism and the war on terror in the region. Governor Bello says while the Nigerian Army is winning the war against terrorism, all hands must be on deck to EmPOWER survivor girls to live purposeful lives that will impact society.

"Governor Bello uses this opportunity to appreciate the efforts of President Muhammadu Buhari is securing the release of Chibok Girls stressing his optimism that others would reunite with their families as the Federal Government is not resting until everyone in captivity is freed.

"The Governor calls on government at all levels,  domestic and international partners-- governmental and non governmental, the clergy, and the entire society to intensify their relentless efforts in the pursuit of a better life for girls during peace, conflict and after while appreciating them for the work done over the years.

"Governor Bello calls on parents and caregivers to pay closer attention to the needs of the girl child stating that instilling values of strength, self awareness, self confidence is one of the most effective ways of EmPOWERing the girl child to adequately prepare for the vagaries and cruelty of life.

"He assures girls in Kogi State that they are priority and his administration will continue to explore policies,  opportunities and partnerships which will EmPOWER them against predators and ensure that Kogi State remains secure and peaceful not only as a prerequisite for development but especially for the sake of the girl child who suffers the most in times of crisis".