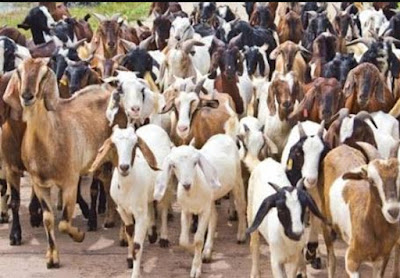 About 200 households in Yobe state who are affected by the Boko Haram conflict, on Thursday,  received 800 special breed of goats and cash token as part of the empowerment initiative of the Victim Suport Fund (VSF)

VSF is federal  government humanitarian
organ set up in 2014 to provide support to all persons affected by armed conflicts in Nigeria.

According to the Executive Secretary of VSF, Professor Sunday Ochoche, the program was part of the 2017 afro-support projects of the fund in northeast Nigeria which whas kickstarted as a pilot scheme in Gaidaim local government area of Yobe state.

He said the programme was designed "to assure food security and livelihood in the medium to long term".

VSF explained that "in order to ensure maximum output, all of the livestock being given to beneficiaries have been examined and duly inoculated to ensure compliance with specifications and also to prevent breakout of any diseases.

It was explained that "the specific breed of livestock chosen for this project is the Borno Brown Goat.

"Each household will receive three (3) females and one (1) male and a cash sum of N20,000 each to enable them provide initial feeding for the livestock and support their families in the interim", said the VSF chieftain.

"In all a total of 800 animals and four million naira will be distributed to the beneficiaries
Professor Ochoche said the intervention "targets 200 households identified and selected from the Hausari, Ashekari, Kolori and Geidam communities".

He added that VSF is also collaborating with the Yobe State FADAMA III project to provide routine veterinary services to the benefitting households for the period of one year.

"This will not only guarantee the health of the livestock but also ensure productivity. It is anticipated that within one year of implementation, each household would have recorded an increase of 12 goats as the breed is reputed for producing 2 kids every 6 months. And this endeavour will be replicated in other conflict affected communities in Borno and Adamawa".

The Yobe state commissioner for education, Muhmmmed Lamin, who represented the state governor, Ibrahim Gaidam, at the event thanked the VSF for bringing such laudable poverty alleviation initiaive to the victims of Boko Haram in his domain.

He however pleaded with the VSF to expedite the redemption of its promise of assisting the locals in the area of irrigation farming which he said was time bound.