At least 18 persons were confirmed dead and as much as 29 others got injured after 4 Boko Haram insurgent a coordinated multiple attack on residents of Maiduguri suburb, Kareem's Pick Blog reports. 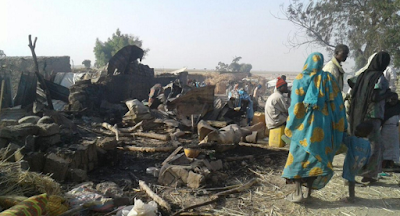 The attack was the biggest in terms of large number of casualties that was recorded in recent times.

Thunderous sounds swept over the dusking city of Maiduguri at about 6.30pm on Wednesday evening.

Police confirmed that the blasts were caused by two females and two males suicide bombers who sneaked upon some crowded locations, including a mosque and detonated themselves.

A statement issued by the Borno state police command said the 29 injured persons are currently receiving treatment at the University of Maiduguri Teaching Hospital.

"The first explosion occurred at a prayer ground, while the other explosions occurred thereafter, all within the community.

"A total of eighteen  persons including the four suicide bombers, died in the multiple explosions. While twenty nine others sustained various degrees of injuries and were rushed to university of Maiduguri teaching hospital/State Specialist Hospital for medical attention .

"Police patrol /EOD teams promptly mobilized to the scene to sanitize and render the area safe. Normalcy has been restored to the community", said Isukwu, a ranked Deputy Superintendent of Police.

Boko Haram is responsible for the death of well over 20, 000 persons and displacement of about 4 million people  -  mostly women and children during the nearly nine years of the ongoing conflict within the north-east Nigeria alone.

Boko Haram, a group that emerged as a violent Islamic organisation in the year 2009 gained massive support from a ever-ready army poor and unemployed youths that dotted the region located on the shores of the receded Lake Chad.

Former governor of Nigeria's Central Bank, and now King of the most populous city in Nigeria, Kano, Mr Sanusi Lamido Sanusi has recently mentioned Northeast Nigeria as one of the poorest regions in the world.

The North East region began its journey towards the depth of poverty in the 1960 when experts began to notice the fast receding shores of Lake Chad - which had reduced speedily by 95% by 1980s from it former over 20, 000sqkm.

Historians who documented the disappearance of Lake Chad said the Lake that was over one million square kilometre (1,000,000km2) by 5000 BC began to dry long before the 20th century.

According to Wikipedia' Free Encyclopaedia the disappearance of Lake Chad's water was even mentioned by even former British Prime Minister, Winston Churchill who foresaw the drying up of Lake Chad way back in 1899.

"In Winston Churchill’s book 'The River War: An Account of the Reconquest of the Sudan', published in 1899, Churchill specifically mentions the shrinking of Lake Chad", Wikipedia mentioned.

"Altogether France has enough to occupy her in Central Africa for some time to come: and even when the long task is finished, the conquered regions are not likely to be of great value. They include the desert of the Great Sahara and wide expanses of equally profitless scrub or marsh. Only one important river, the Shari, flows through them, and never reaches the sea: and even Lake Chad, into which the Shari flows, appears to be leaking through some subterranean exit, and is rapidly changing from a lake into an immense swamp.", Churchill wrote 117 years ago.[12),

But by early 1990s Lake Chad's waters has already dried up by 95 percent leaving a population of about 68 million people who were largely depending on the Lakes for their economic benefits without any option to fall back on.
The Lake’s Fauna and Flora disappeared. About 85 species of fishes that were once found in the Lake had all gone.

The about 68 million riparian population around the Lake continued to shift their base as they followed the  Lake as its shore shrinks away.

By the year 2000, the Lake’s waters had already left the shores of Nigeria, leaving the region with conflicts brewing amongst fishermen, farmers and herdsmen who usually spoiled for war over territorial control. 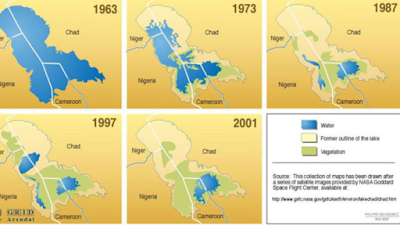 As days go by, poverty became endemic with young men and women left with no jobs and no education. And conflicts like the farmers and herders clashes continued to recur. The Maitatsine war emerged in the 1980s; it was later followed by the brief emergence of Nigerian Talibans in Kanama Yobe state in the early 2000s. And finally the Boko Haram conflict which brought the region to its present devastated state.
Boko Haram has continued to leverage on the deeply seated poverty to recruit young minds into its deadly ranks.


Thousands of innocent young men who were coerced to join the gang were indoctrinated to become bestial killers and suicide bombers, whom the Nigeria military and sister forces from neighbouring countries are currently waging war against.