The Yobe State Government has procured new equipment for the Ministry of Works, Transport and Energy to standardize and accelerate road construction projects in the state, a government statement said.

Smarting from years of distraction by the ill-fated Boko Haram insurgency which has slowed down its developmental programmes, Yobe state government is now leaving no space in taking advantage of the emerging peace to quickly deliver its promised democracy dividends to the people. 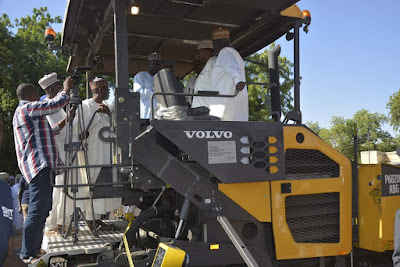 Governor Gaidam had recently informed President Muhammadu Buhari in Abuja that the state is not under any kind of Boko Haram control despite pockets of periidic attacks. Hence he said his government's priority is taking developmental projects to the people.

The new road construction equipment, according to a statement signed and issued by the Governor's spokesman, Abdullahi Bego, "include a German-made VOLVO P6820C Tracked Paver-Finisher used for smooth asphalt overlay with a capacity of 13 tons adequate for highway pavements and other large-scale road projects".

"Works, Transport and Energy Commissioner, Lawan Shettima Ali who conducted H.E Governor Ibrahim Gaidam on an inspection of the new equipment today said his ministry will continue to do the state government proud by putting all the resources at its disposal to building good roads that will stand the test of time.

"His Excellency,  Governor Gaidam, said he was impressed with the quality of the equipment. He added that the state government will continue to engage the Works Ministry in direct labour execution of even more road projects within and outside the state capital.