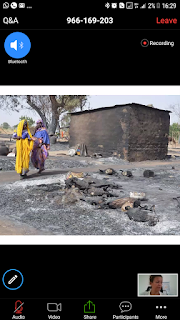 At least two persons were killed and many others feared injured as gunmen believed to be Boko Haram, on Saturday night,  attacked Maikadiri village located in southern part of Borno state in northeast Nigeria on Saturday night, official said.

The attackers, according to a source from Askira-Uba, crept upon the sleeping villagers at about midnight and began to shoot sporadically.

"They killed at least two people and set ablaze some houses, including that of the Hakimi (District Head) of Maikadiri", said Abbas Gava the spokesman of the Vigilante Group of Nigeria, Borno state.

"The attack occurred between 12 midnight and early hours of Sunday: they also burnt down an SUV belonging to the District Head, and then took away two of his pick-up vans".

"We just got the report from our commander in charge of Askira-Uba, Mr Hamidu Wampana, who confirmed the attack to us.

Also confirming the incident, the member of the Borno state House of Assembly, Engineer Abdullahi Askira said Maikadiri village and its environs have been vulnerable to Boko Haram attacks because they share close borders with Sambisa forest.

He said "though the youth of the village took the courage to engage the attackers in a fight that sent them fleeing, the insurgents killed two persons and burnt the house of the District Head".

"The attack on Maikadiri came about two months after Muthaku village which is not far away was also attacked by Boko Haram", he added.

The lawmaker said Makadiri and Muthaku are two villages of the same ward which are not secured by soldiers despite their proximity to Sambisa forest.

"We have soldiers deployed in Mussa, Dille, Lassa, Askira villages, but Maikadiri and Muthaku which are at the extreme are left without any form of security", he said.

"This is not the first time these communities are coming under such attack; that is wy we are pleading with the military to help deploy soldiers to villages bordering Sambisa in order to secure the safety of residents there", he said.