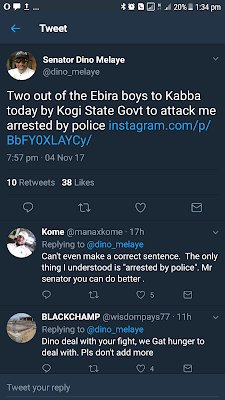 Controversial Kogi Senator who escaped being lynched by a mob in his hometown was not so lucky on his twitter page as his followers massively mobbed him badly for sending out a poorly written tweet.

Embattled Senator Melaye who may not have been in his element when he picked his phone to tweet about the arrest of two persons linked to the attack he suffered during the Kaba Day celebration in Kogi state, didn't give room for editing before pressed the send button.

Immediately his poorly crafted twit heat the web, hundreds of his followers began to lambast him for committing such a grammatical blunder.

The tweet reads:- "Two out of the Ebira boys to Kabba today by Kogi state gov't to attack me arrested by police".

Perhaps the troubled Senator Wanted to say "Two out of the many Ebira boys sent to Kabba today by Kogi state gov't to attack me have been arrested by police". 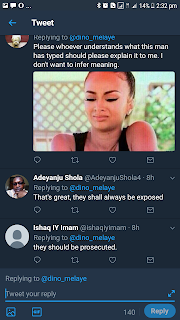 The embattled Kogi West Senator who donated the sum of N3 million cash to support the cause of the Kaba Day celebration organisers before he suffered the mob attack, seemed to have relocated to his hotel room where he began to give update tweets on the on ongoing disrupted occasion which was later hosted at a different venue with the governor of Kogi state in attendance.
Dino had  in several chain of tweets accused the Governor of Kogi state governor, Yahaya Bello for the attack he suffered.

In one of the tweets Senator Dino promoted a link from Kogi Reports which says Kabba Day: Governor Bello desecrates Okunland with Imported Thugs 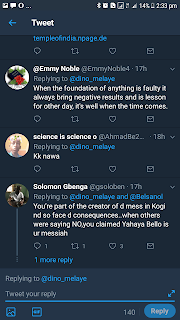 But all of those tweets did not seem to impress his readers, who picked on him for his grammatical flaws, which to this Blog was more of a typographic error or slip of the finger.

One of the early tweet attacks on Dino's post by one @Menaxkome says: "Can't even make correct sentence. The only thing I understood is "arrested by police" Mr. Senator, You can do better

Another fan of the Senator, one @ DaddyteelHassan said; "sir, can't you construct meaningful sentence at all? All your tweets show that….U are a senator for heaven sake!

However despite the bashing, Mr Dino still steal the heart of some on the post. One @Abdullahidz told the Senator that "We will voluntarily offer protection prayers for you. Don't ever quit in your struggle for the emancipation of Kogites".
But @Abdullahidz's solidarity for Dino was immediately attacked by another pissed off fan @OyewoleSaheed7 who tweeted back asking him "You and who?

Senator Dino stands out as one of the few members of the National Assembly who enjoys a large follwoership on the social media, especially Twitter.
Dino's twitter handle @dino_melaye has over 347, 000 followers. On that particular bad tweet Dino's handle go only 11 retweets and 40 likes.