Skip to main content
- December 17, 2017
As Empathetic General Buratai Visits Wounded Soldiers in Kaduna Hospital
By (Blogger) Abdulkareem Haruna
It was a practical show of leadership with empathy at the 44 Nigeria Army Reference Hospital in Kaduna on Friday when the chief of Army Staff, Lieutenant General Tukur Buratai used his most needed resting time to visit some of his sick soldiers who were hospitalised as a result of the injuries they had, at one point or the other suffered, while in action at the front lines.

After hosting one of the  best Conferences ever organised under his office - the 2017 Annual Chief of Army Staff Conference - General Buratai did not rerun home for a deserving rest. There is more work to be done both in the office and even at the frontline.

Cladded in simple brown mufti jacket that usually characterises his down-to-earth humility that is uncommon of a war General, Buratai moved from one bed to the other within the hospital ward as he exchange pleasantry with the recuperating soldiers and empathising with them over their conditions.

His presence at the hospital - which was a surprise visit - had not only lifted the spirit of the sick soldiers, but had also noticeably bolstered that flaming fire of patriotism and readiness to, as soon as their doctors deemed fit,  jump on their feet  and pick up their arms to return to the battle field.

The air was filled with cordiality as the soldiers took turn to interact casually and most respectfully with the foremost soldier who, in more than a couple of times, had not only personally led troops to fight Boko Haram insurgents in their dens, but had also spent night in the most deadly of all front lines at a time the insurgents were still  basking in their self deceit of being in control of territories.

He said it was an unscheduled “visit to Nigerian Army Wounded in Action Soldiers from the north east on hospital admission at 44 Nigerian Army Reference Hospital Kaduna on Friday 15th December 2017.

Buratai was conducted round the four special wards dedicated to soldiers that were injured while in action at the northeast is counterinsurgency Operation code-named LAFIYA DOLE. 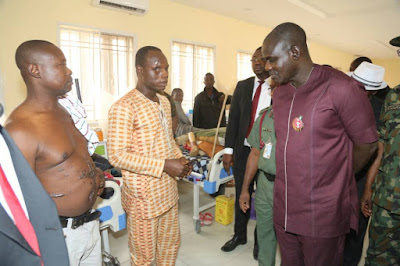 Kukasheka who is also the Director General Army Public Relations said the hospital’s Director, Major General Ikechukwu Bernard Okeke,  conducted the COAS round the wards of the hospital.

“The COAS interacted and commiserated with each of the soldiers on admission as he went round from one bed to another. During the visit, he also gave further directives on the review of the patients conditions, expedited treatment and proper care.

“Lieutenant General TY Buratai has always made it a point of duty to visit troops recuperating in hospital whenever he visits any military location”, the DAPR said.

The Friday visit of the COAS  to the 44 Army Reference Hospital Kaduna might be seen as normal perfunctory duties expected of him, but what Kareem’s Pick Blog makes of it goes beyond that superficial perception.

What the Army chief does any time he visits troops location is the grain of character every true leader should possess as an inherent quality.
Someone once said “the most valuable component of leadership is not power, position, influence, notoriety, fame, talent, dynamic oratory, persuasiveness, intellectual superiority, academic achievement, or management skill -  not even a soldiering gallantry - but the most valuable component of leadership is Character.
Buratai is a man of  character. Good character. His character  is not only consistent but also  functions as the cradle of the credibility that keeps him going and winning the war against all forms of enemy forces, despite all forms of deliberate distractions by unpatriotic elements.

Kareem’s Pick Blog is particularly endeared to the COAS for his consistency in keeping to his philosophical vision which has been “to have a professionally responsive Nigeria Army in discharge of its constitutional role”. And the Army Chief had been keeping to that vision he  unveiled since July 2015.

Though the Nigeria Army, like any other institution that is run by humans,  may not be absolved of one shortcomings or the other, it would be uncharitable and grossly unfair to say the Nigeria of today is the same with what we had in the past. The perceived impunity for which the army was excessively maligned in the past have gradually disappeared today despite few skirmishes or class the army may have had with the media recently.

This is not to say the Army would not still be criticised. Thank God Buratai understand that the media is just a mirror through which the society sees itself. 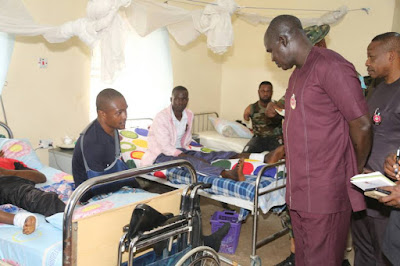 Today Nigeria has an army that is quick to dismiss an erring soldier who is found wanting in upholding the codes of his or her professional ethics.

We have read and seen an army court martial that has even last week  sentenced a soldier to death for committing murder during the course of his duty in the northeast Nigeria. We have seen soldiers going to jail for human right violations or acts that undermine the army’s integrity and so on.

We have seen a chief of army staff rewarding soldiers for gallantry.

We have seen a once so-called dreaded Boko Haram being degraded and reduced to a hit and run bunch of gangs in few areas of the northeast Nigeria.

We have seen a chief of army staff who, despite the enormity of supervising multiple operations across the different regions of the county, is still carrying out welfare programmes like erecting  more befitting accommodations for soldiers, renovation of dilapidated barracks buildings, building several army command guest houses to boost the revenue generation for the army among others. We are seeing a positive transformation of the business of ground trooping under the watch of Buratai.

It is unarguable that more than any other past army chief, General Buratai is reputed to be the COAS that has so far invested the most in the professional development of soldiers via several trainings, seminars and workshops, that are in tune with modern ways of doing things, for all cadre of officers and men in the Nigeria Army.

Need this blog mention the avalanche of awards that have showered on General Buratai from within and without the borders of this country?  What, a distinguished patriot per excellence.
God bless the General.