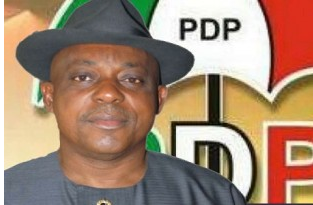 The deal is done and no amount of fireworks of protest by defeated aspirants would undo what transpired at the Saturday’s national convention of Nigeria’s main opposition party, People Democratic Party (PDP), as over 80 percent of delegates voted Mr Uche Secondus as their new national chairman.

Of course Mr Secondus’ victory did not come as a surprise because it was predicted by the party’s main financier, Governor of Rivers State, Mr Nyesom Wike, who was on the national television 24 hours to the convention day giving reasons why his candidate would emerge.

But what was surprising was the defeat of seemingly strong contender like High Chief Raymond Dokpesi, who fretted and strutted the entire coasts of Nigeria, leaving no stone unturned as sought for the chairmanship of PDP. He came second runner up with over 1900 votes behind the winner anyway.

According to the declared result of the rancorous convention, Chief Secondus, a former interim national chairman of the party, before former Governor Sheriff took over the mantle, scored a round figure of 2000 votes. He was closely tailed by Nigeria’s former minister of education, Tunde Adeniran who polled 231 votes, while Raymond Dokpesi, who had the loudest of all campaigns got 66 votes. Another candidate, Taoheed Adedoja had no vote, not even one from himself, to his credit.

The result of the convention has once again denied the Yorubas of the southwest an opportunity to lead the PDP. It is on record that since the formation of PDP the southwest Nigeria has never produced any national chairman. And this was the reason being advanced by the South-West politicians in the party that the seat should be micro-zoned to south-West after the party had agreed that the seat should go the the southern region.

Micro-zoning is a concept coined by Nigeria politicians to represent further zoning of an elective office to a particular sub-region.
It was for this reason that about four Yoruba top politicians came out to contest the PDP chairmanship thinking that the seat would definitely come to one of them.

While other regions of the country agreed on micro-zoning of the offices allocated to them, the south west was up in flames as those from south-south insisted that the principle of micro-zoning would not work because they too have an interest in occupying the coveted seat.

Raymond Dokpesi and Uche Secondus showed their interest and vowed never to back out.

The South-West politicians like Bode George, Former Governor Gbenga Danniel, Tunde Adeniran, Taoheed Adedoja, did not take the ambitions of the south-southerners seriously - hence they went to sleep thinking they would coast to victory any how.

Few days to the convention, it became clear for the Yoruba contenders that they were coasting towards a calamitous trajectory by allowing themsleves all coming out to covet for the same seat while those from the South-South seemed to be working out perfect strategy to clinch the seat.

Belatedly, the Yoruba contenders began to complain and asking the leaders of the party to enforce the principle of Micro-Zoning. But they were told the National Secretariat has nothing to do with it. It was at that stage that Bode George and co agreed to step down for each other so that the votes coming from their zone would not be fragmented. Even that agreement was not followed holistically. The stepping down was an exercise done with reluctance. Messrs  Adeniran and Taoheed did not step down for one another.

While the SouthWest Yorubas seemed to have relied on the comradeship of their fellow regional kins, the South-South apparently went  beyond their riverine boundaries to reach out to other delegates. This was evident in the circulation of a controversial list, known as The Unity List, which has Uche Secondus as the Chairman and most of those that are now elected national executives of the PDP as part of the list.
All protest about systemic rigging by the duo of Dokpesi and Adeniran was deemed belated as officials said they were not even aware of such list and even if it was truly circulated at the Eagle Square venue of the convention, the officials said they did not see how it would have determined the outcome of the poll.

But why are the South-West aspirants crying alone? They don't seem to have the backing of their senators or governor or even members of the House of Reps from the region?

Governor Wike even went further to analyse why any candidate that emerged from the southwest would mean further crisis and possible defeat for the PDP.

“The zone is prone to incessant crises as can be seen. Any candidate who emerges from the South-west will lead to further crisis from other factions from that zone.

His denigrating analysis may be right or may be wrong, but it seriously angered the South-West politicians who are almost invoking the wrath of Oduduwa on the Rivers man should he not publicly apologise.
Wike did not apologise. He stood by his words.

The Governor of Ekiti State, Mr Ayodele Fayoshe, another loud voice of the PDP was surprisingly silent about the micro-zoning crisis in his party. He did not rise in the defence of his kinsmen. This also arouse the curiosity of Kareem’s Pick.

Why was Fayoshe so silent about the dilemma that befell his zone. Was he in cohorts with his Rivers states counterpart? Or did he work against his kinsmen to support Secondus?

Mr Fayoshe had about three months ago took the lead, broke the election rules of the country to declare his ambition in contesting the presidency of the country at an elaborate even in Abuja.
Many Nigerians wrote him off as a joker. Some said he was only a pretender who would at the end of the day settle for the vice presidential slot of the party come 2019.

It is a known fact that if Fayose wants to be vice President on  a PDP presidential ticket, he certainly would not wish any of his brothers from the west to become the National chairman of the PDP.  It is also reasonable for Fayose to argue that it would be easier for PDP to make inroad in the APC dominated-SouthWest only if they have him as Vice Presidential candidate coming from that subregion, where the ruling All Progressives Congress (APC) has a sitting Vice President of Nigeria.

Fayose is bosom friend and ally to Rivers state’s governor, Wike.  The duo fought side by side to ensure Ali Sheriff, whom they once brought to power is removed from the seat as PDP national chairman following the discovery that the former Borno governor was working against their long term interest.
So it would be understandable if Fayose chose to keep an informed silence and watched his colleague denigrate his kinsmen and even jettisoning the micro-zoning principle that would have benefited his region.

With Secondus in power as PDP national chairman, Governor Wike has certainly become a formidable power broker in the PDP. And he would make a lot of inputs on who gets what as the party decides their presidential ticket bearer come 2018. And it is certain that he would not forget the interest of his friend, Governor Fayose.