A non profit humanitarian organization, Foundation for Refugees Economic Empowerment (FREE), on Saturday turned on the 100th  boreholes it has so far drilled for communities where persons displaced by the Boko Haram insurgency reside in Borno state.

FREE is an NGO formed in memory of late Mohammad Yaseen Hallaby, a Syrian descent, who died in1902 and was buried in Manchester, United Kingdom.

Residents of Sheraton New City, a burgeoning suburb at the outskirts of Maiduguri said the borehole cited in their neighbourhood would end their days want for clean water.

Only last week did the Borno state ministry of health and the WHO announced that the cholera outbreak that hit the state since August 2017 was finally brought to an end.

Largely blamed for lack of clean water in most communities besieged by IDPs, the last cholera outbreak claimed 62 lives of the over 5000 persons affected. 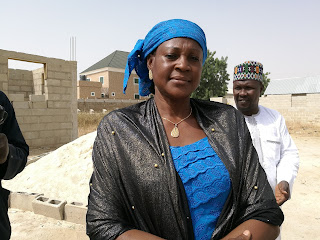 Mary Mamza, a middle aged resident of Sheraton New City, Maiduguri, said they were excited about the wash borehole provided by FREE because it came to wipe away their sufferings.

“We couldn’t have been happier for the wash borehole provided for us in this community”, said Mrs Mamza.

“One of our major headaches in this new community has been access to clean source of water. We had to go far distance to get water for drinking or for our domestic needs.

“Many of the residents here, especially the children often contract diseases especially the recent cholera due to lack of clean water. But today our sorrow has been wiped away courtesy the assistance from FREE  and we thank them”.

Gambo Wada, a civil society actor working with FREE Foundation said the idea behind provision of 100 boreholes in communities within and around Maiduguri was basically targeted at addressing the water needs of the people.

“We were hit by the worst cholera outbreak recently and it took the grace of God for us to come out of that epidemic”, said Wada.

“He said communities in Borno state became prone to diseases because the IDP situation has overwhelmed the few sources of water that were available.

He described the intervention by FREE foundation as “a support that was timely, considering the insurgency situation that befell Borno forcing people to migrate and crowding in places with little or no basic amenities”.
Wada whose job was to monitor the implementation of the 100 boreholes said he had witnessed most of the boreholes commissioning especially in Konduga, Jere and Maiduguri Metropolitan Council.

Nana Bulama, the coordinator of FREE, said the commissioning of the 100th borehole at Sheraton New City brings to and end the NGOs 2017 project in the state.
She said another set of 100 boreholes are targeted for next year.

FREE is a foundation formed in memory of Mohammad Yaseen Hallaby, a Syrian textile merchant who was the first Muslim to be buried in a Manchester cemetery in 1902.

His grave was discovered in June 2017 by his grand daughter, Zeina El Debs, who was told that a newspaper reporter made the discovery when investigating the story of early Muslim graves in Manchester.

Mr Hallaby’s grave was engraved with a Turkish hat and an inscription stating ‘Born in the Damascus”.

Having found peace with the discovery of her ancestry, Mrs El Debs said she became inspired by finding the grave and decided to raise money to help build a well in his name.

“I wish to revive his memory as he had no direct descendants. In his name, I want to raise money for a well in Nigeria for displaced, needy refugees”, she told a UK based newspaper #AsianImage’'.

FREE is registered in United Kingdom with UK Charity Number 116414.