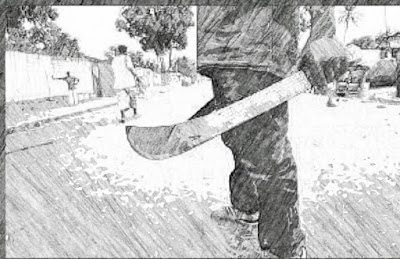 A mentally deranged man on Tuesday caused general grief in Kwaya Kusar town of southern Borno when he stormed a primary school during class hours and used a machete to hack two pupils to death.
Jafi Primary school in Kwaya-Kusar town closed midway when the mad man went on rampage wielding his deadly weapon.
The police said a teacher who probably tried to stop the carnage was also wounded alongside another female pupil.
Angry youth of the village reacted in anger as they surrounded the man, disarmed him, and beat him to unconsciousness.
It was not explained why the mad man suddenly turned violent.
The spokesman of the police in Borno State, Victor Isukwu, said the killer madman who was identified as Gaji Adamu of Lube community in Kwaya Kusar Local Government Area of Borno State, has been arrested and taken to the state Criminal Investigation and Intelligence Department (CIID) in Maiduguri.
“On Thursday 30/11/17 at about 0930 hrs, one Gaji Adamu ‘male’ of Lube village of kwaya kusar LGA, suspected to be of unsound mind, armed with matchete entered into Jafi Primary School, Kwaya Kusar town and matcheted two male pupils to death”, said Mr. Isukwu, a Deputy Superintendent of Police.
“While a teacher and a female pupil were wounded in the attack. As a result, irate youths mobbed the suspect, who is now unconscious and admitted in hospital under protective custody.
“The corpses and injured have been evacuated to Gombe general hospital.                           “Meanwhile the commissioner of police, Damian Chukwu has directed the divisional police officer of Kwaya kusar Division to transfer the suspect to the CIID for a discreet investigation as well as to determine the mental state of the suspect”.