What West Africa Needs from US is Development Not Drones 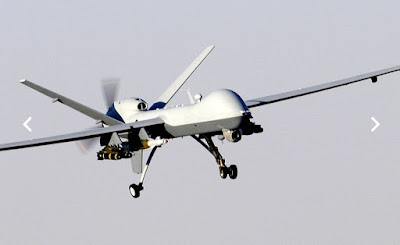 The article says “The drones will be used to conduct strikes on terrorist groups like al-Qaeda and its affiliates that operate along the country’s border with Mali. The move would allow the US military to significantly expand its reach in West Africa”.

In the same article, an Africa analyst, Mr Lawrence Freeman, was amply quoted airing his views on how counterproductive such endeavour would be for Niger and other sister west African countries on the region – and I share his views.

Islamic militias like Boko Haram and the offshoots of Al-Qaeda take refuge in the vast ungoverned spaces around the borders of Niger which are nothing but open deserts dotted by tiny hamlets and villages. Most of these communities are either under the control of  Boko Haram or are used as cannon fodders for the terrorists.

Deploying a drone from a remote control room over such territory where even the local ground troops find difficult to distinguish between a gathering of armed terrorists and innocent village farmers, would be like priming Niger and its sister countries for a self-inflicted mass carnage.

The Nigerian experience of January 2016 when a local Air Force fighter jet, despite getting all the vital coordinates about a location where Boko Haram fighters were camping,  but went to drop bomb on an IDP camp in Rann village, killing well over 200 persons, still leaves a bitter pill in our mouths.

I can say there are more occasions than few when innocent villagers are rounded up as Boko Haram fighters. Many were accused of harbouring the insurgents without necessarily carrying out a background checks to ascertain if their alleged actions were out of free will or done under duress.
If human soldiers could make such grave mistakes, how much can we rely on the accuracy of an unmanned aerial vehicle called drone.

One is not sure about the level of assurances Niger Republic may have gotten from the Pentagon on how safe the combat drone could be before it okayed its deployment over its airspace.
The US should rather send down men and boots to help Niger and probably its sister neighbour countries of Chadand Nigeria fight the scourge of Boko Haram.

I seriously share the opinion of Mr Freeman that the US and other European nations can, rather than deploying drones that may further deepen the root of the crisis, consider bringing in projects and programmes that could help develop the deserts and bring life unto the ecologically challenged region.

Niger is one of the four riparian countries which contribute to the 68 million population that depended on the now receded Lake Chad water to sustain its ecosystem. With 95 percent of the Lake now gone, these communities are left with hunger, deprivation, poverty, disease and illiteracy. They have no better preoccupation than strife and conflict whose ultimate necessitating factor is survival.
Nigeria's home bred Boko Haram, which now has strong presence in the fringes of Niger, Chad and Cameroon, gain its wildfire acceptance in these ungoverned spaces because vast majority of its converts are poor, and Boko Haram uses its resources from bank robbery, extortion and other related heists to lure its easy and readily available recruits.

I believe the US would do a great deal of help to Niger and the region in general if it could convert the huge resources meant for drone deployment into ventures that would make more sense to the people.
The drone may wipe out Boko Haram from their located hideouts, but may not  wipe out the ideology from the heart of those the drone had missed. There are large number of persons who are sympathisers of Boko Haram (for example) not because they loved to; but for the fact that they lost their loved ones by the bullets or bombardment of government troops. A woman whose sons and husband were killed by a drone attack in a targeted Boko Haram camp would surely live to tell a story of hate about a US drone to her surviving kids. And the ideology continues.

The vast areas of lake Chad – about 20, 000SqKm – are known as under-waters of the Lake with a high propensity for robust agriculture. Experts say such piece of soil remain eternally fertile for all kinds of cropping. Why not the US explore such natural enablement by investing in the food production sector. Doing so would surely stimulate growth, job creation, engender peace and even reconciliation in the region. Though I understand international diplomacy is not given out like a father christmas.

I do hope the #US government and all other advanced countries trying to help the sub-saharan west Africa overcome its challenges can do so better if they look at the option of development and not drone deployment.

I have heard of arguments that the Nigeria military should have bombarded Sambisa forests when copious evidence showed that majority of the Boko Haram and its followers were all holed up in there but were discouraged by the presence of human shield they use. Others have also argued that had the military considered those captives as collateral damage and go ahead to annihilate the entire living soul within Sambisa, Nigeria and other sister African countries wouldn't have been in this mess. But that too wouldn't have solved the original problem. Rather it would have by now generate more enemy of state – hence the vicious circle of breeding fresh Boko Harams who are suckled by the milk of anger.

I have in my over 10 years of covering this conflict come to understand that no amount of boots and bullets could engender any sustainable peace in the war-torn sub-saharan west Africa. Not even a round-table dialogue would achieve that. The onky panacea to this problem is addressing the root cause of the whole conflict. We must painstakingly retrace our step back to where we came and what went wrong on our path towards development.
We cant afford to ignore the contribution of the climate and ecological circumstances that confront us today.