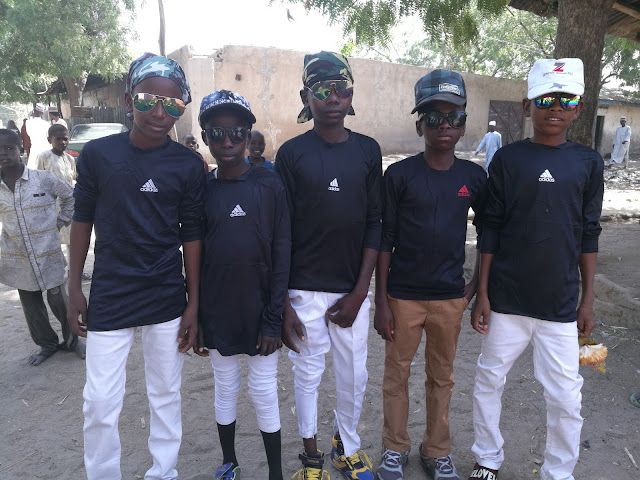 These five boys,  all between the ages of 11 and 10 years became a spectacle at a wedding ceremony in Moduganari area of Maiduguri, Borno state capital during the weekend.

Their uniformly black Adidas T-shirts matched with white trousers and pairs of canvas boots as well as dark sun shades, made them look like some pop stars.

They became a cynosure of the event.

With either a head scarf or face cap adorning their heads,  they walked proudly through a crowd of people that gathered at the venue of a local wedding.

They held their shoulders high as they bounced in their steps - not being shy of their uniquely incongruous dressing at an event that is supposed to be graced with traditional kaftan and caps.

They caught the attention of Kareem's Pick Blog and it was their greatest pleasure to be called for a photograph.

A brief chat interview revealed that one of them was a younger brother to the groom. So they planned to put on that uniformed attire to grace his wedding.

They looked happy and excited because they have found a little avenue to express themselves despite Boko Haram insurgency that turned Maiduguri into a mega #IDPCamp.

People live in fear as suicide bombers still sneak in to cause havoc.

Parents are still worried about where their wards go; and how safe it is for them off their watch.

The atmosphere does not provide the liberty a child needs to express himself. But life must go on for the children whom everyone must protect from being actors of the crisis.

Children must also be protected from excessive knowledge about happenings in town, lest we fall guilty of engaging underaged kids in the peace keeping or counterinsurgency operations of the military.

The best one could do for a child is giving him or her a chance at school to be educated so that they could make informed and positive decisions of their own as they go into adulthood.

But their right to play and express themselves - the way kids do in normal circumstances - must remain inalienable.

The Boko Haram conflict must not deny children their rights to being boys or girls; their right to dream and fantasise being their chosen role models.

Inside or outside the camps for IDPs, children must be given the chance of being themselves.

Let them play their hide and seek, their football, their sand play, ride bikes, climb trees, fly kites and paper planes, sing and dance in a free and safe environments.

It is not their business how we manage the insurgency because they didn't ask we the adults to mess our society up.

But we must do everything humanly possible to provide them with knowledge about safety and knowing when to call attention of elders when they notice anything or someone that is suspiciously questionable. 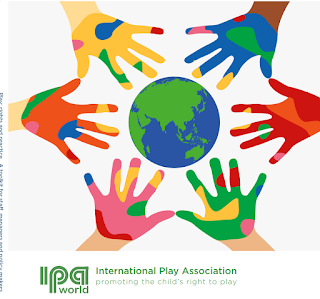 The #UN has emphasised the importance of play for children as an inalienable rights.

The importance of play is recognised and enshrined in the  Convention on the Rights of the Child (CRC) of 1989.

It explicitly states in article 31 that:
"States Parties recognise the right of the child to rest and leisure, to engage in play and recreational activities appropriate to the age of the child and to participate freely in cultural life
and the arts."

According to the International Play Association (IPA) the above enshrined article is an indication of the significance the United Nations places on children's play it published  General comment No. 17 on article 31.

This helps everyone with an interest in the wellbeing of  children to better understand the importance of play.

#IPA in its publication titled 'Access To Play For Children in Situations of Crisis', defines Children's play as "any behaviour, activity or process initiated, controlled and structured by children themselves; it takes place whenever and wherever opportunities arise".

The publication however observed that the UN Committee on the #Rights of the Child "has expressed a deep concern, that in situations  of conflict or disaster children's right to play is often given lower priority than the provision
of food, shelter and medicines".

"This is despite the fact that play is known to be crucial to children's wellbeing, development, health and survival in these circumstances.

"Children have a spontaneous urge to play and participate in recreational activities and will seek out opportunities to do so in the most unfavourable environments.

"However, certain conditions need to be assured, in accordance with children's evolving capacities, if they are
to realise their rights under article 31 to the optimum extent.", the publication indicates.