The very first attack by suicide bombers on the city of Maiduguri, Borno state, came at a time the military introduced a curfew regime that forces residents to retire indoors before the hour of 8pm. 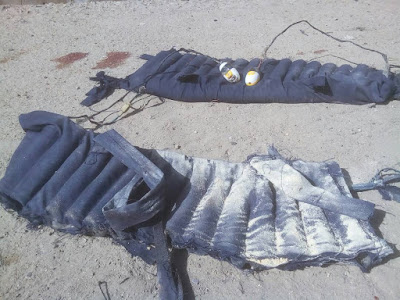 Boko Haram had, before the curfew, usually sneaked in to attack Maiduguri and environs during the dark hours when everyone, including the armed security forces, was less vigilant.

But with the upwards review of the curfew hours, the Boko Haram fighters also altered their strategy.

Sadly both the civilian residents of Maiduguri and the security forces did not factor in the likelihood of the enemy changing their modus operandi while executing the new curfewed strategy that has been reviewed for the third time on its duration that was meant to last for only one week.

The residents were totally caught off guard when four teenage females, who were primed with massive explosives, sneaked into their midst in the densely populated Muna Garriage commercial area as they were all hurrying to finish their businesses before dark. The attackers detonated their bombs almost simultaneously.

At least 10 innocent civilians were killed and 65 others were injured in blasts.

The mass casualty recorded was a clear sign that everyone had let go their vigilance.

The four suicide bombers who also lost their lives brought the total figure of death casualties to 14.

The National Emergency Management Agency (NEMA) conformed that the attack occurred in Muna Garriage general area, a location of Maiduguri that has earned predictable notoriety for such attacks.

He told newsmen that an emergency response team comprising NEMA, State E emergency M management Agency (SEMA) and International Committee of  Red cross (ICRC), immediately deployed to the scene for evacuation of  victims of the attack.

"The victims were evacuated to the Maiduguri teaching Hospital and general hospital for treatment while the dead were disposed at the martuary.

"Details will be provided by the security agencies in due course,"said Ibrahim.

The police in Borno, however, said at least 12 persons were killed and 48 others injured on in the attack.

The police also gave a different narrative on the attackers.
The Commissioner of Police, Damian Chukwu, said a male suicide bomber detonated an explosive device at a crowded market killing himself and 10 other persons.

"One other suicide bomber out of panic detonated explosive and blew himself alone into pieces," he said.

Mr. Chukwu said the wounded persons were evacuated to the University of Maiduguri Teaching Hospital.

The police commissioner called on the people to be vigilant and report suspicious persons in their communities to security agencies.

"People should be vigilant because Boko Haram insurgents have not surrendered".

The attack came three days after Boko Haram's main leader Abubakar Shekau released a video in which he claimed none of the Chibok girls still held by Boko Haram would ever be found. He said his group last year "willingly" released 107 schoolgirls who refused to accept his creed, but the estimated 100 who remain are pleased to stay with Boko Haram.

The clip also showed images of military vehicles, armored tanks and a helicopter that Shekau claimed his men had destroyed during a shootout last week.

Boko Haram, Nigeria's homegrown extreme Islamic militia, wants to set aside the country's constitution and replace it with Shariah law. Since launching its violent campaign in 2009, Boko Haram has killed tens of thousands of people, displaced millions and staged attacks in neighboring countries participating in a military operation against it.

Kareem's Pick Blog advises residents to increase their sense of vigilance. A mere careless blink of a watchful eyes is extremely dangerous in Borno state as the Boko Haram fighters are still bent on undermining the safety of the communities in the volatile northeast Nigeria.

The intention of the federal government of Nigeria to spend $1 billion (USD) on purchasing equipment for soldiers prosecuting the war on terror is a clear precursor that the hostility is far from being over.

The UN Deputy Secretary General, Amina Mohammed, was on a two days visit to  Maiduguri last week. She left with a clear message - "The Boko Haram war is not over yet".