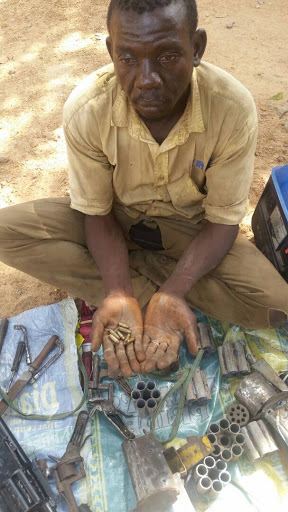 The arrest of a  gun runner and a local manufacturer of assault rifles by soldiers of the Nigeria army could be a major step towards unraveling the mystery behind the source of
arms used in the ongoing conflicts that is on the verge of tearing the country apart.

On Wednesday troops of the Nigeria army intercepted a lone driver who was transporting some locally fabricated assault rifles. Luck ran out the driver, who confessed to be in the business for sometimes, when vigilant soldiers on a highway of Nasarawa state, in central Nigeria, stopped him for a search.

The gunrunner had during investigation revealed the source of the weapons to be a local blacksmith who had earned proficiency in fabricating assault and hunting rifles.

The two persons, Mohammed Bello - the gun runner, and Dan Asabe Audu - the gun fabricator both confessed that they usually supply the arms to one Mr.Damina Saminaka, a notorious gang leader who is presently at large.

A military statement released by the chief Spokesman of the Nigeria army, Sani Usman, did not explain for what purpose Mr. Saminaka use the guns he buys from his suppliers.


His statement on the arrest partly reads:


"Determined to get to the root of the matter, the troops further went to the village where they found out that indeed Dan Asabe Audu has been in the business of illegal arms manufacturing for criminals for quite sometime. They found a complete arms factory with equipment and the products at various stages of production.


Kareem's Pick Blog observed that the suspects' arrests in Nasarawa state which is also within the region where the country's police and military is currently battling to quell series of armed conflicts was very instructive to the fact that they might be part of those helping the locals with weapons to prosecute war.

Nasarawa is the most proximate state to the Nigerian federal capital, Abuja. It also shares common boundaries with Kaduna, Plateau Benue, Taraba and Kogi - which are states that have recently earned notoriety for bloody fights between local farmers and herders.

"Hundreds of lives were lost in the past two years due to such armed civil strife".

It has not been ascertained if Messrs Bello and Audu are the only local gunrunners involved in the illicit business.

The Spokesman of the Nigeria army, Usman, who is a Brigadier General, said some large number of newly fabricated guns were recovered from the two arrested persons.


General Usman, who is also the Director Army Public Relations, said the military needs more of such information from the public so that culprits could be apprehended.
"The public is kindly requested to provide useful information that will assist the military and security agencies in apprehending such criminals to make our society safe
"The suspects would soon be handed over to the relevant security agency for further investigation and prosecution", he said. 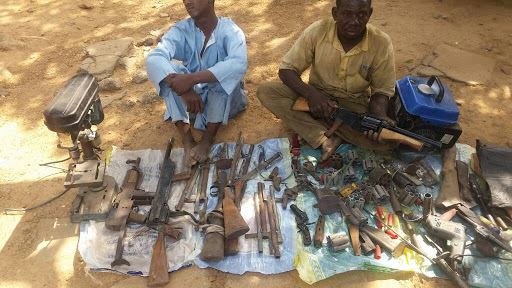 The arrests of the gun runner and blacksmith was however effected at the time the President of Nigeria, Muhammadu Buhari, had instructed the inspector general of police to relocate to Benue state where armed fight between farmers and herdsmen had taken to a disturbing dimension.

President Buhari had been widely vilified for not taking decisive action on the conflict like he was doing with the Boko Haram war in northeast Nigeria.


In May 2017 a union of journalists, known as Benue Journalists’ Forum Nigeria (BJFN), raised an alarm that some 400 armed men masquerading as herdsmen have assembled in a certain location where they operate a fake military camp. The forum asked the federal government to investigate and arrest the group whom they suspected to be fleeing Boko Haram fighters coming to help the herders inflict more pains on Benue residents.

Interestingly, the Nigerian Army on Tuesday, 9 January, 2017 accused the government of Benue of training and running an armed militia group that is believed to be part of the hostility bedevilling the agrarian state.


This accusation arose after troops of the Nigeria arrested nine well-armed militia from Benue, who were found to be on the payroll of the state government functioning as sponsored security volunteers.

Kareem's Pick Blog can report that it is almost customary for government of states in Nigeria to have an army political thugs - mostly unemployed youths - who are weaponised during elections to deal with political opponents.

The army said the nine suspects were arrested at a village called Arufu, in the boundary between Taraba and Benue States.


The army said it's investigation revealed that there are over 700 armed militia being trained in a certain camp in Benue State.
“Five of the suspects were armed with AK-45 rifles fully loaded. During preliminary investigation the arrested armed gang claimed that the weapons were issued to them by one Aliyu Tashaku through an agent of government", an undisclosed officer to PR Nigeria, an online PR agency promoting government programmes.


“The suspects also confirmed that they were 60 in number in their own camp located at Gbeyi, Benue State. However, further investigation revealed that they were more than 700 and well-armed at the camp where they were trained by selected ex-service men on a monthly allowance of N15,000.00 from their sponsors,” said the source whose claims were confirmed by the Commanding Officer of the 93 Battalion, Lieutenant Colonel Ibrahim Gambari, a lieutenant colonel who spoke to PREMIUM TIMES in a telephone interview.
While the governments - both at the centre and state of Benue - deal with such accusation, the public who is always at the receiving end of such conflicts can only help itself by providing intelligence that could expose culprits involved in such illegal gunrunning that fuels the conflict