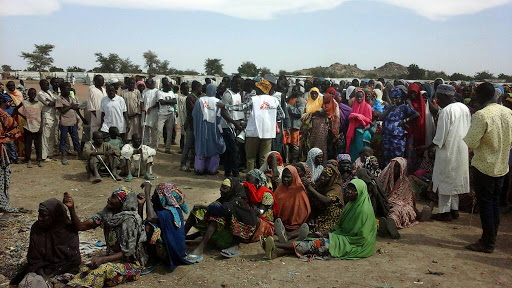 The Head of Mission of Medicines Sans Frontiers (MSF), otherwise known as Doctors Witout Borders, in Nigeria, Mr. Luís Eguiluz, was last week in Pulka village of Borno state where he spent two days at the camp for internally displaced persons (IDPs).


The mission head came with a mind blowing tale of how a swelling population of over 60 000 people are struggling to survive hunger, thirst and lack of decent accommodation.

Pulka became a major refuge camp for fleeing residents of various communities that are hitherto  being tormented by Boko Haram fighters.

Nigerian soldiers have since the recapture of Gwoza local government area made Pulka their base and all IDPs and returnees are given protection there.

From a village of about 30,000 farmers and ranchers, Pulka now has over 60,000 people living in camps that dotted the rocky community.

With about 15,000 children facing harsh weather conditions and a total of about 12, 000 persons  given medical care by MSF personnel who can only access the isolated location by air, Pulka is certainly not a very nice place to be.


"Pulka is a small town in Borno, north-east Nigeria. It is an isolated enclave, controlled by the military, in the middle of territory made very inaccessible by the conflict between the army and armed groups known collectively as Boko Haram.

"The town is about 100 kilometres from the state capital, Maiduguri. Our teams must cover this distance by helicopter, on flights operated by the United Nations, because of the continuing insecurity.


"Before the conflict, 30,000 people lived in the town. Now the population has doubled with the arrival of large groups displaced by fighting in the surrounding areas.

"On one of the days when I was in a camp for displaced people, whose wood and white canvas tents have become part of the town, a woman told me that, in addition of her four children, she takes care of four others because their mother is missing. She explained about the hardships of this situation, as she had to share four children’s worth of food with all the children, as she did not have the distribution cards for the ones that were not hers.

"I met other displaced families, mainly women and children. There are few men in the camps. Some had stayed in their villages to watch over their houses and their fields. Others were afraid to flee.

"They told me about their most basic needs: water and food. The population of Pulka, both locals and displaced people, cannot access the fields on the outskirts of the town – their only livelihood – due to the high risk of attacks. The Nigerian army allows them to venture only a certain distance from the town, so those living there must cultivate crops in this limited space. People also collect wood for cooking, but it is not enough to cover all their needs.

"Other women complained about the waiting time to access the few water points that have been created. Children walk around the camps and the town with nothing to do because the schools are closed, the teachers have gone to Maiduguri and there are no activities, aside from some games organised by MSF. Many women also regretted how few clothes they had been able to bring with them and the difficulty in accessing medicines. Most of the displaced people had fled their villages very suddenly.

"The people now in the camps have suffered numerous traumas. Many of them have seen people, including friends and family members, die violently. Many women and girls have suffered sexual violence. As a result, the mental health support MSF provides is crucial. Some fled when the armed groups arrived and started killing people and burning houses. Others had to stay and survive through the conflict before fleeing towards Pulka.

"Not enough tents in the displaced camps
There are also returnees, people who had fled from Pulka to Cameroon or to other areas of Nigeria, such as Maiduguri, and who are now beginning to return, encouraged by the Nigerian Government. However, they are returning to a camp without decent conditions, where the population is entirely dependent on scarce humanitarian aid. There aren’t any public services, neither administration nor schools.


"The unability to farm and the lack of paid work make it impossible to live without food support.
To date, the state capital of Maiduguri has been the primary focus for humanitarian work in Borno State. The few organisations that operate in Pulka do not have adequate, trained or experienced staff and are unable to meet the needs of the population. The MSF hospital there employs 200 staff to cover the needs of the population.

"When displaced people reach Pulka, they often do so after having walked for days without food or water. Upon arrival, they undergo a security check by the army, and only after that can they access humanitarian services, such as registration, medical attention, emergency food distribution and vaccination.

"These services are not provided in good enough conditions and happened under the scrutiny of the security forces. Once registered, displaced people go to shared tents and spaces to wait for a tent for their family in a process that can take months.

"There are currently more than 7,000 people waiting for shelter. Of these, 6,000 are living outside, exposed to the cold nights of Pulka.
MSF monitors the conditions because the risk of epidemic outbreaks, such as measles and meningitis, is exacerbated by the lack of adequate shelter. In addition, the exposure to low temperatures increases the risk of respiratory diseases, particularly in children.

"The delays in the construction of family tents meant our team had to carry out an emergency distribution of blankets to help people cope with the low temperatures.

"One question we are often asked is whether the conflict in north-east Nigeria is a cause or a consequence of the humanitarian crisis in this region. The humanitarian needs of the population are the result of both Borno’s structural problems and the ongoing conflict there. Health standards were already low before the conflict. But they have been exacerbated by the massive displacement of the population, the lack of access to basic services and the insufficient level of humanitarian assistance".