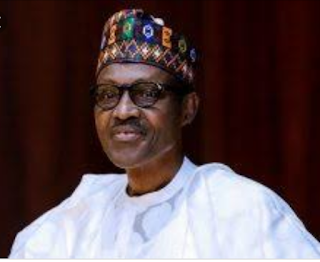 In a nationwide broadcast to commemorate the new year 2018, Nigeria President, Muhammadu Buhari, itemised the "ongoing" efforts being made by his government to make railway system a major means of transportation for both human goods and services in the country.

Buhari, who felicitated with Nigeria for witnessing yet another  new year said 2018 promises to be a pivotal year in the nation's collective desire for change.

He said the crux of his new year message was to inform citizens about the intense efforts being put in place by his administration to "address our country's huge infrastructural deficit".

The President said his government is using the Ministry of Power, Works and Housing as the main driver to realise his administration's core goals.
"We are going to make significant in-roads in advancing road, rail and power projects across the country", Buhari's new year message, as excerpted by Kareem's Pick Blog, partly reads.

"The Ministry of Power, Works and Housing is one of the drivers of this Government's commitment to renew and increase Nigeria's stock of infrastructure in order to achieve global economic competitiveness as targeted under the Economic Recovery and Growth Plan.

"With regards to Railways, we have set ourselves ambitious targets. Already in construction stage is the Lagos-Kano Standard Gauge Railway.
The line should reach Ibadan from Lagos by the end of this year and will carry two million passengers per year and five million tons of cargo will be transported every year giving a substantial boost to the country's economy.

"Construction of the Kano – Kaduna segment is expected to commence this year and reach Kaduna by the end of 2019. By the end of 2021 the two ends will be joined so that we will have standard gauge railway across the main North-South trading route.

"The Abuja – Kaduna route will be boosted by additional rolling stock next Thursday and will be able to handle one million commuters annually.

"At the same time I have approved and negotiations will be concluded in the first part of this year for the Port Harcourt to Maiduguri line covering Aba, Owerri, Umuahia, Enugu, Awka, Abakaliki, Makurdi, Lafia, Jos, Bauchi, Gombe, Yola and Damaturu.  The Abuja to Itakpe line will go through Baro and terminates in Warri with construction of a new seaport at Warri.

"Secondly, Lagos to Calabar the "Coastal Rail"  through Ore, Benin, Agbor, Asaba, Onitsha, Sapele, Ughelli, Warri, Yenagoa, Otuoke, Port Harcourt, Aba, Uyo and Calabar.  In the next few years, all these Nigerian cities will be linked by functional modern rail systems, giving enormous boost to the social and economic life of our people.

"With respect to the Abuja Capital Light Rail, progress has reached 98% completion, as at 64% completion when we assumed office.  Only test runs remain before start of operations.

"This train service will stimulate economic activities in the Federal Capital and provide residents with an efficient and safe transportation system.  Twelve railway sub-stations around the capital over a 45.2 kilometre route will serve as a catalyst and a pull factor to the economy of the area.  The Light Rail System will reduce traffic congestion and carbon emission in line with the Administration's policy on climate change".

President Buhari had earlier in his address empathised with Nigerians on the difficulties they experienced during the Yuletide as a result of fuel scarcity which he said was artificially created by unknown persons in order to cause tension in the country.