Nigeria Air Force to investigate cause of its attack helicopter crash 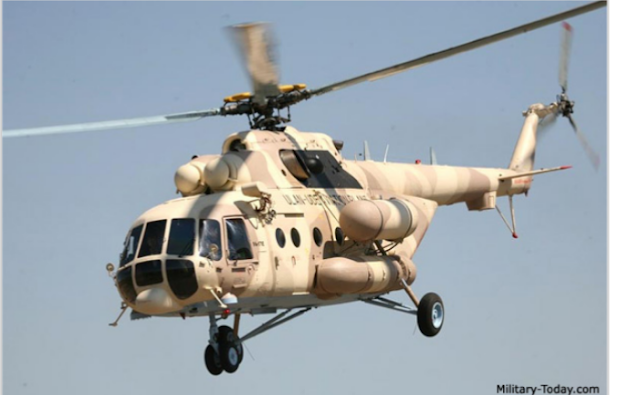 Maiduguri- The Nigeria Air Force command said Monday that an investigative would be set up to probe why it's attack helicopter Mi-17 suddenly went down crashing while on a mission in the volatile northeast region of West African country.
The news spread on Monday that an attack Chopper crashed in the jungle of Borno state the birth place of Boko Haram insurgency, but all crew members survive the fall.
The NAF has ruled out an attack by enemy forces like Boko Haram which the military is jointly fighting in thenortheast Nigeria, saying it was a technical fault that caused
This is the latest in the series of air mishap involving helicopters of the Nigeria air force.
The most recent crash involving Nigeria Air Force choppers was about five months ago.
Director, NAF Public Relations and Information, Air Vice Marshal Olatokunbo Adesanya said in a statement released to the press that the helicopter suffered a technical glitch while on a mission.
"A Nigerian Airforce NAF Mi-17 helicopter has suffered a mishap while undertaking a mission in the ongoing counter insurgency operation in the North east.
"The incident which occurred today, (Monday), 8 January 2018, resulted significant damage to the helicopter.

"There was however, no loss of lives as a result of the incident.
"The Chief of Air staff, Air Marshal Sadique Abubakar has immediately directed the constitution of a board of inquiry to determine the exact cause of the incident in line with global best practices.
"The NAF continues to solicit the support and understanding of the general public as it daily strives to ensure the security of Nigeria and Nigerians".
The rather frequent cases of helicopter crashes both in the military and civil section questions either the technical know-how of the engineers or the pilots the  pilots flying vessels.
The last helicopter crash was on the 6th July, 2017 when an Agusta 106 light utility helicopter of the Nigeria air force suddenly plunged into water in Borno State following an engine fault.
On 29th August, 2015 another helicopter on the fleet of the Nigeria air force with call number NAF030 crashed in Kaduna killing all the 7 passengers on board.
On the 10th of April, 2015 another helicopter belonging to the Nigeria air force crashed in Lagos while on training exercise. There was no death casually recorded in the crash as the helicopter was said to have fell in to the water.
Nigerians witnessed even more helicopter crash outside the military circle.
In January 2016 a Bristow Helicopter conveying a crew of about 4 persons from Port Harcourt to Lagos crashed into water.
On the 12th August 2015 another helicopter belonging to the same company, Bristow crashed in Lagos killing six out of the 12 passengers on board.
If the information posted on Wikipedia are correct, The Nigerian Air Force (NAF) "is one of the largest in Africa, consisting of about 10,000 personnel and a handful of aircrafts  including 12 ChineseChengdu F-7s, and 11 Dassault-Dornier Alpha Jets, armed helicopters, and military transport aircraft"