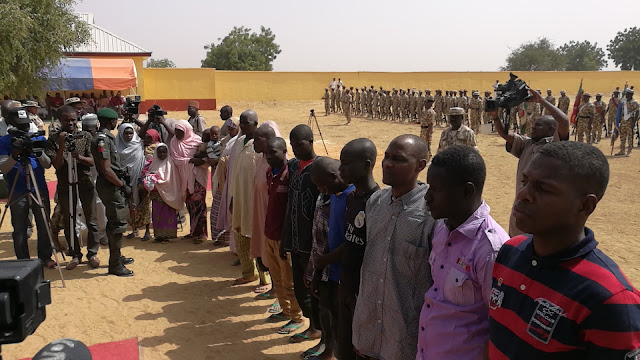 By Blogger
Soldiers in Northeast Nigeria on Monday released 244 Boko Haram suspects who recently surrendered and denounced their membership of the deadly terror group.

The hand over of the ex-Boko Haram suspects was done in commemoration of the 2018 edition of Nigeria Armed Forces Remembrance Day that usually takes on 15 January.

He said the suspects were released after they were properly screened   and confirmed that their denouncement sincere.

One of the released females told journalists shortly before they were taken away by government officials that she had been in the custody for about a year.

"I was accused of being one of the women cooking for the Boko Haram", said the middle age woman who did not say if she was guilty of the accusation that led to her arrest.

Most of the young men paraded at the handover event told the state governor that they have turned a new leaf and ready to help government with information.

Shettima took time to speak with some of the insurgents who assured him of their readiness to be absolved in to the society where they promised to be law abiding citizens.

The Nigeria government had in 2016 set up a de-radicalization program for the repentant or arrested Boko Haram fighters which is called Safe Corridor Initiative.

The aim of the programme was to house ex-Boko Haram insurgents in a military controlled facility where they would be subjected to some mindset changing drills that would lead to granting amnesty to those that may have done away with the radical ideologies of the Boko Haram.

The media was however shut out of the entire trial being handled by the office of the country's Attorney General.

The release of the 244 repentant insurgents came a day after Boko Haram's main leader, Abubakar Shekau, released a video in which he claimed none of the remaining Chibok girls would ever be found after his group had "willingly" released the 107 schools girls who refused to accept his creed.

He also mocks the parents of the remaining missing girls to consider his members as their sons-in-law by virtues of the girls being "happily" married to the Boko Haram fighters.

A video clip from the released footage showed some of the girls telling their parents to join them in their new faith because "our father Abubakar Shekau has married us off to our husbands and he also ensures that we are well taken care of. 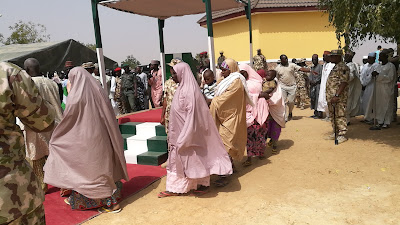 The clip also showed front-line footages of some the military vehicles, helicopter and armored tanks Shekau claimed his men had destroyed during a shootout last week.

Boko Haram, Nigeria's homegrown extreme Islamic militia, wanted to set aside the country's constitution and replace it with a Sharia system of government, Since 2009 that it picked up arms against government, Boko Haram is cred for the death of nearly 100, 000 persons and displacement of about 5 million people in the volatile northeast region of the country.