The commander said weeks of hostility against Boko Haram had yielded results as troops under his command had succeeded in overrunning most of the locations under the control of the insurgents.


General Nicholas disclosed this when he hosted his first all-security stakeholders meeting following his assumption of office late last year.


The Theatre Commander said the major  unresolved challenge before the security in northeast Nigeria is  how to tackle the continuing cases of suicide bombing by Boko Haram.


Addressing the security chiefs from the states of Borno, Yobe and Adamawa states, at  the Military Comman, and control Centre in Maiduguri, which is the  the Headquarters Theatre Command Operation Lafiya Dole, General Nicholas said the meeting was necessary especially on the need to foster acquaintance  close the gaps in the security architecture of the state and the north east generally.


According to a statement issued by the Spokesman of Operation Lafiya Dole, Colonel Onyema Nwachukwu, Major General Nicholas used the forum to  give an overview of the operational activities of troops in the conflict region.


"Major General Rogers Nicholas, noted that presently troops have overran Boko Haram  positions in Sambisa and have physically occupied Camp Zeiro", the statement said.
And that "several Boko Haram logistics including combat and non combat vehicles as well as weaponry have been destroyed in the ongoing Operations DEEP PUNCH 2.


Colonel Nwachukwu said the Theatre Commander stressed the  need for synergy and information sharing at all fronts to successfully drive the operations.


"He called on all not to hesitate to share information amongst themselves. The Theatre commander informed all of the closure of road Bama-Maiduguri and Gwoza-Damboa. He said the closure became necessary to prevent fleeing Boko Haram insurgents from escaping from the ongoing onslaught by troops.


"He urged all to intensify effort in ensuring that fleeing insurgents are apprehended. On the curfew in place in Borno state, the Theatre commander noted that it should be jointly enforced by all security agencies.


"He urged all to ensure compliance on the part of some security operatives and personnel who have been using their position to encourage violation of curfew and beating security check points. He pointed out that such such unsavoury attitude will not be condoned. 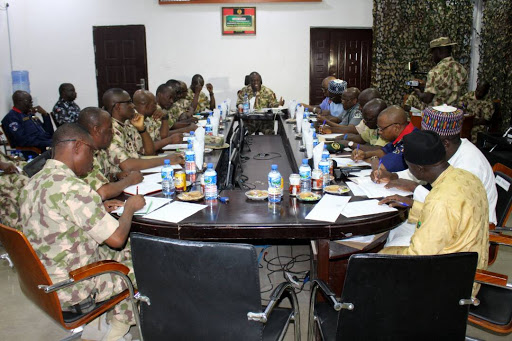 "The Theatre commander also addressed the need for the the relevant security agencies to complement the effort of troops of Operation Lafiya Dole by deploying operatives and personnel in some of those areas that have been liberated by the troops".


On the continuing cases of suicide bombing activities in the theatre, the statement said "the Theatre commander urged all to be more proactive, vigilant and ensure regular patrols of the vulnerable areas such as Muna Garage and Molai areas".

Defeat of Boko Haram has been a regular phrase of the military for sometimes now. The public seemed to be getting use to its unreliability especially in the face of continuing attacks and suicide bombings. But with the recent one coming from General Rogers, a crack general whom many officers and men attest to his credentials as war lord, the touted end of Boko Haram's day in Sambisa forest may as well be for real.