​​Between a spirited journalist and a grateful widow

- June 24, 2018
​
By Kwapchi Bata Dibal
Ever since our paths crossed on one of the darkest days of Borno state, fate has continued to make us bump upon each other in our respective journeys to life’s end.
And for each time we meet, this poor widowed mother of nine would never be tired of recalling how the singular act of discharging my editorial responsibility as female journalist had redirected the misfortune that befell her.
Her morale sense of gratitude always brings to mind the saying that we should “all be grateful to one who makes us happy, for they are the charming gardeners who make our souls blossom”.
In this context I think the reader would agree with me that the gratitude is reversed because this widow always make my heart blossom.
Fast-backward; Mrs Esther Ishaya and I met on the day Boko Haram insurgents carried out one of their earliest high profile killings in Borno state. It was during the days of my active journalism, long before I was appointed to serve as a media aide to the incumbent Borno state governor, His Excellency Alhaji Kashim Shettima.
I never knew the event would mean anything so important to this woman because all I did was my job.
As a television journalist working with the largest TV station in Africa,  NTA, my training, among other professional ethics,  was to accord priority to videos and pictures of events/happenings in order to make  any story I tell credible.
Yes I can still recall my drills; Pictures must not always be clear but must also be  married with clear soundbites.
It was on Friday the 28 January 2011 after Jummat prayers, and I was still in the newsroom of NTA Maiduguri zonal centre, when I received one of the most disturbing calls of Boko Haram gunman shooting  in a densely populated area in Maiduguri.
My producer mobilized resources for me and we rushed to the scene.
On our way, I began to receive clearer picture of what actually happened.  It was a tragic incident - a high profile assassination - the first of its kind in the then annals of Borno state.
When we go to the scene, lo and behold, on the ground, still in the pool of his blood, was  the body of the then All Nigeria Peoples Party (ANPP) Gubernatorial candidate, Alhaji Fannammi Gubio. The deceased politician was not alone in the streaming pool of blood. There were eight (8) others who were laying lifeless on the ground as well.
Sadly the killing occurred near the family residence of the assassinated ANPP flag-bearer. 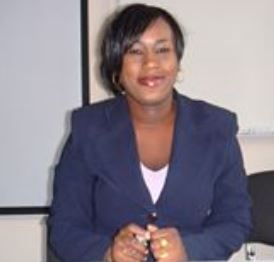 Of course the crowded area was in chaos. I refused to allow emotion becloud my professional disposition. I immediately ordered my camera man to start filming. And I did a couple of interviews with some eye-witnesses.
This I was able to achieve even as security agents had formed a barrier and  cordoned off the area, restricting access to many journalists. May be it was because I was a woman, or may it was because I arrived there earlier; or perhaps I was simply lucky. I got all the shots in no time.
It was a headline news in almost all the section of the media but I was the only journalist privileged to have the recording of the bodies on the scene as it happened; my  other colleagues came while the corpses were being conveyed to the hospital; some only saw the corpses  at the hospital.
I was actually given a special commendation for covering the incident.
The rest is history.
Fast-forward: Four years  later , I was no longer in active practice of my cherished profession - Yes. I was appointed Senior Special Assistant on Media to the Borno state governor about three year back then - It was during Christmas season, and I was given the privilege of bringing Christians widows for the usual Christmas gift that is annually given out by her Excellency, wife of Borno State Governor, Hajiya Nana Shettima.
I in turn gave the task to leaders of some major churches to bring their widows for the gift. On the distribution day, a widow  came up to me afterwards and said “you may not know me but you were the person that presented the news of my husband’s killing on NTA; he was one of the security men attached to the late Gubernatorial candidate”.
My heart sank.
I became sober tellling my self that why should I be remembered for breaking such a bad news; and here is the victim still recalling that dark hour of her life.
But unlike me, the widow seemed to appreciate that I was just doing my job.
I was short of words even though  I managed to utter some words of empathy and condolences.
I requested for her number, and since then we became talking friends. During the course of our relationship, I discovered the hardship she was going through especially raising nine (9) children her husband  left her with. And I made it a duty and responsibility to always include her in any kind of largess that the governor is giving to widows and women affected by the Boko Haram conflict. Our relationship waxed stronger and we see each other as family.
I still never believed that my act of sympathy to her, which I see as nothing extra-ordinary, had actually meant so much to her because I have also facilitated such kind gesture to many others.
This widow made me appreciate her sense of gratitude on the 18 June 2018 when Borno state government was to commission the Dangote Housing estate in Maiduguri.
I have never been so honored.
Today I am glad that Mrs Ishaya, made the list of the 200 widows who benefited from the 2-bedroom apartment Dangote Housing Estate.
Coincidentally, She was one of the beneficiaries that was handed microphone to  give vote of thanks to the Dangote Foundation and the Borno state government.
To my utmost surprise Mrs Ishaya went out of her way to mention my name amongst the personalities that have made her day and ensured she eventually has a roof over her head.
When I asked why she mentioned my name, being a very junior government official in the context of that occasion, her response sent tears dripping off my eyes.
“God made you an instrument to wipe my tears just the way your story brought painful tears to my eyes as I watched on the 7pm news on the 28/01/2011. If not for you, nobody would have remembered me”.
It was an emotional moment for me as I stood with Esther.
Even though journalism is one thankless and soul-depressing job, here I am being thanked for just doing my job. It then immediately dawned on me that on this job, a journalist has to do his bid by striving to  responsibly tell all stories - be it pleasant and unpleasant.
Of course for me, it might be just another piece of story; but to those affected it is a dark chapter - a painful turn in their lives. For Esther the  story that I reported and the images I published some seven years ago still haunt her; and it still hard to wipe off that gory  photo of her breadwinner sprawled in the pool of blood.
As we hugged each other, I am glad she now understands that there is still ample humanity in the heart of journalists who tell the ugliest of all tales.
* Dibal is a former NTA Maiduguri Reporter, now an SSA Media to Governor Shettima