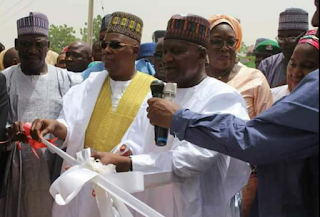 By Blogger
Alhaji Aliko Dangote, Nigeria's foremost business tycoon has on Monday  commissioned and handed over  to the Borno state government 200  units of houses meant for persons displaced by Boko Haram conflict.
The 200 units of two-bedroom flats were built at the cost of N2 billion, which is part of the N7 billion the Kano state born money-bag said he has invested in the crisis ravaged northeast sub-region through his NGO, the Dangote Foundation.
Dangote foundation provided the funds that procured all the building materials, while the Borno state government deployed other resources for see that the 200 houses were built.
Mr Dangote had also commissioned a state of the earth building complex of the Borno state Primary Health Care Development Agency (PHCDA), another project jointly executed by Dangote Foundation and the state government.
Speaking at the commissioning of 200 housing estate which also comprised a School and Clinic located at the outskirts of Maiduguri near Dalori Village in Konduga Local Government Area, Mr. Dangote said his foundation has been reaching out to the troubled people of the northeast since the  insurgency heightened in 2012.
He applauded Borno governor, Kashim Shettima, for steering the affairs of the state and ensuring that such humanitarian partnership works despite the distraction of the continuing Boko Haram conflict.
"I am very grateful to witness this important occasion which marked the official commissioning of 200 housing estate, and newly constructed Primary Health Care Development Complex built by Dangote Foundation in partnership with Borno state Government" he said.
"Since 2012, Dangote Foundation has been supporting the North East, particularly Borno, and have spent about N7 billion as part of effort to ameliorate the sufferings of IDPs.
"We will continue to work and ensure that the IDPs are finally resettled back to their communities with dignity".
Governor Shettima who described Mr. Dangote as "a symbolic. hero of Borno and a highest gift to Africa"  said the business man has  always identified with the state and the entire subversion.
Mr Shettima noted that the highest non-governmental assistance ever received by Borno state came from the Dangote Foundation.
"It is on record that Dangote Foundation is the only organization outside government that has  given the highest donation in support of the humanitarian crisis not only in Borno.
"I am so glad that with this support and construction of this village to our IDPs, Dangote will now serve as permanent symbol in the state", the governor said.
Mr Shettima said the 200 houses are to be allocated to widows whose husbands died in the on going Boko Haram insurgency.
Speaking earlier, the Borno state , Commissioner for Reconstruction, Rehabilitation and Resettlement (RRR), Professor Umara Zulum, commended Dangote and Borno state Government for  prioritizing the welfare of  IDPs in the state.
The commissioner said the newly commissioned housing estate, clinics, schools and the befitting Primary Health Care Development Agency was a timely intervention for the displaced people of Borno state.
Highlights of the event was presentation of the houses to selected benefiting widows whom Mr Dangote presented N100, 000 cash to each of them.