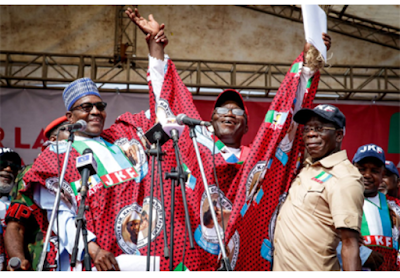 By Blogger
On July 14, 2018, the people of Ekiti went to poll and came out with a not too surprising result.
Though the outgoing governor of the state, Mr. Ayodele Fayose was not the candidate of his party, the people voted as though he was the one running for yet another term.
Fayose's anointed candidate, the incumbent deputy governor, Professor Kolapo Olusola, was to some certain degree inconsequential to the decision made by the people on Saturday. To them the deputy governor was like the "voice of Jacob and the hand of Esau".
Fayemi, a former governor of the state and a minister in the current APC federal government, polled 197, 459 votes to emerge winner, beating his main challenger, the deputy governor, Olusola who scored 178,121.
But many Nigerians, especially the people of Ekiti still considered the result as a victory against Fayose.
Fayemi emerged victorious with a comfortable lead of 19, 338 votes against candidate of the ruling party.
Interestingly, the summation of the votes polled by Messrs. Fayemi and Olusola which stood at 375, 580 votes was much higher than the total votes casted by Ekiti people during the 2014 governorship election which was 329, 498 votes.
That means there was a remarkable improvement in the participation of the Ekiti voters in the just concluded governorship election. This is because the aggregation of the votes polled by Fayemi and Olusola, alone, was about 50 percent of the total registered voters that picked their PVCs before the last  election.  It should be noted that INEC actually registered  a total of 667, 720 voters for the last election.
How Fayemi bounced back??
In 2014, Mr. Fayemi, a sitting governor, was dealt a serious defeat by Mr. Fayose who was an opposition candiate. He polled only 120, 433, while his challenger, Fayose, polled 203, 090.
Fayose led against Fayemi in 2014 with a gaping margin of 82, 657 votes.
But even as an incumbent, it is still surprising that Fayose's popularity waned so much that he lost about 25, 000 of his supporters giving his candidate's performance in Saturday's election.
And Fayemi, who suffered so much defeat in 2014, suddenly gained 77, 026 vote popularity, comparing  his performance in the just concluded election with what happened four years ago.
Examining the 2014 and 2018 victory results, it could be said that Fayemi snatched back Fayose's popularity margin of 2014 to win on Saturday. The former governor was defeated by 82, 657 votes in 2014 and he now returns to take back most of that figure (77,026 votes) to add to his 2014 result (120, 433 votes) and he is now governor-elect.
To that end, one could say, Fayemi was able to maintain his 120, 433 support base and then campaigned harder to grab a chunk of Fayose's disappointed supporters – 77, 026 of them; while the outgoing governor lost 24, 969 votes of the figure 203, 090 votes that brought him to power to his arch-political rival.
How Fayose Lost out of favour
Fayose was given a second chance to prove himself, after his shameful on 16 October, 2006 when he was impeached out of the office few months to the end of his first tenure; but he ended up messing up by focusing only on what he termed as stomach infrastructure.
His so much fixation on denigrating the Presidency of Muhammadu Buhari at the detriment of development of his state, was widely frowned at by the people of Ekiti state. And the people waited patiently to pay him back on polls day by voting him and his deputy out of office.
Ekiti is a civil service state and education was placed in the front burner of the people's priority table. Sadly, Mr Stomach infrastructure would rather embark on white elephant project than pay teachers' wages. And he made the mistake of going into an exiting election with a large army of hungry and angry civil servants.
Fayose undermined the power of the workers and banked on empowering political thugs and crumb pickers under his lavish dinner table. And the rest is history...
Fayemi has been given yet another second chance, by the people of Ekiti state, to also prove himself; it is hoped that he would make the most out of it. If he fails to make his people proud, the citizens may as well bar any son or daughter if Ifa from occupying the Oke-Aya-Oba government house again.