At last, Maiduguri Central Mosque is completed after 33 years of myth 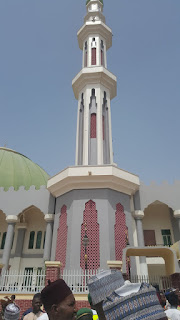 By Blogger
The central mosque Maiduguri was on Friday 8th February commissioned 33 years after its building commenced.
In 1986, concerned citizens of #Borno felt that the then old edifice that was the  mosque needed to be brought down for a modern sanctuary to rise In the heartland of #Yerwa.
When a committee sat down to design and cost what it would take to erect an ultra modern mosque and #Islamic resource centre, the estimated bill was put at N800 million. And that was in 1986 when foreign exchange was N2.02 to a dollar (and N3.90 at black market rate).Which means the state needed about $396 million.
The new mosque project was a huge buy in for most of the illustrious sons of Borno who donated generously towards its building.
The mosque commenced and the entire brick and mortar work was done with relative speed. At least 65% of the structural work was done between the late 80s and early 90s.
But after that, the work stopped. And as many years passed by the mosque became abandoned due to lack funding.
Gradually some ridiculous rumor and superstitious believes began to fly around that the mosque cannot be completed.
That it was almost a taboo that the mosque would be  finished.
But rumor, they say, thrives when the public starves of clarity. And that is how the 'death' superstition around the grand mosque all turned out to be a fluke. An unfounded myth that some children were even brought up to believe.
Even without its being completed, His Eminence the 19th Shehu of Borno, Mustafa Ibn Elkanemi, under whose reign the idea of a new mosque was conceived, still passed on. Another Shehu, the current Royal Highness, Abubakar Garbai Elkanemi  came on throne.
It is during his reign that the mosque got completed through the support of some individuals and, to a large extent, the Borno state Government.
But that didn't happen until after 3 decades and 3 years later.
The commissioning of the mosque actually came with mixed feelings. Joy and sadness.
Joy, because it has finally come to reality. Maiduguri  now has a befitting mosque to match its pride as a state from an old empire that has the longest history of Islamic civilization in Nigeria.
And the sad aspect of it was that it took so long a time that almost all the great patriots of Borno, who assembled in 1986 to donate generously for the building of the mosque to commence, are no longer alive to see the fruition of their collective dreams.
QUESTION:
What could have stalled its completion that it took so long? The clerics and men of God will say that is how it is destined to happen.
But those with critical minds will say there was indeed lack of will on the part of the successive leadership.
The Shehu of Borno who inspired the will to finish the mosque during his reign and time: Mutawali Kashim Imam, who made the first and largest individual donation of 200 million in support of the Shehu's vision;  and Governor Kashim Shettima who provided the uncommon financial and political will and stamped his foot until the mosque is completed,  must all be commended alongside others who toiled day and night to make it happen.
The Sultan of Sokoto, His Eminence Abubakar Saad (iii) who led other top emirs to commission the mosque said the Maiduguri mosque exemplifies what an ideal mosque should be - A prayer sanctuary and Centre for Learning.