Boko Haram and the fishy deal on the Lake Chad 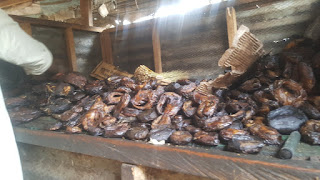 By Blogger
In the past few days, I have been talking to a couple of internally displaced persons (IDP) who  fled the recent attack on Baga town of Kukawa local government area, to  Mauduguri, with a view to having some insights as to what the experience had been running for dear life, on foot, for three days.
I intend to use the findings of my investigation in a story I am working on for publication in my mother medium, PREMIUM TIMES.
After series of interactions  with these poor, but hard working Nigerians who believed that nothing dignifies a man like hard work and self dependence, I did not only have a clearer perspective of their plights during and after Boko Haram took over the civil administration of The border community, but they have also been able to make me have a better understanding of the controversy surrounding allegations and counter allegations of the fish business on the Lake Chad.
Anyone following the controversy, would recall that there was a time the military  banned the sales of stock fish from Baga on the allegations that they belonged to Boko Haram.
As a matter of fact, in 2015, the military carried out a public burning of tones of stock fish seized from traders base on the claims that they were being transported and sold on behalf of Boko Haram.
Sometimes in 2016 the fishermen too had accused the soldiers and their top commanders of taking over the fish business, while forbidding the local fishermen from going to the markets.
Though the then military command had severally denied it, my interaction with the IDPs proved contrary. As a matter of fact, and according to the displaced traders the soldiers were not only deeply involved, some of them even personally conveyed  trucks loader with fish to the market in Maiduguri.
I also learnt that though the military command had later relaxed the ban on the fish trade, and warned soldiers to desist from such extra-regimental activity, the merchants and fishermen revealed that some greedy soldiers had gone further to device other means of extorting funds from them in the form of taxes collected per each bail of fish.
"We used to bring a carton of fish and sell for N25,000, now it comes at the rate of N45,000 because of the exorbitant fees we have to pay on the way," said one fish merchant, Idris Musa.
The poor fishermen had also given a clearer explanation on the allegation surrounding  Boko Haram fish being sold in the market which the military said the proceeds were used to fund Boko Haram activity.
A Baga fish merchant, Modu Muhammad,  said some of the fishermen who were caught with such stocks had no option because "they were like being between the devil and the deep blue sea."
Who is the devil and who is the deep sea?
The answer to this questiona, and the details of how the controversy built up would be given in a story article titled: 'Boko Haram and the Fishy Deal on Lake Chad' to be published on PREMIUM TIMES and shared on this blog.....
Watch out...