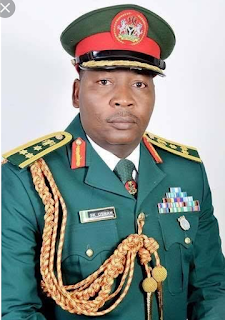 By Blogger
It was an unsettling shock when Brigadier General Sani Usman, Director Army Public Relations, announced his voluntarily retirement from the Nigerian army today.
Regardless the once in a while difference he may have had with journalists in the line of duty,  General Usman stands as one of the best military public relations and image maker the country has ever had.
Hence the shock that everyone who heard or read about his retirement expresses.
General Usman's sudden exit from the army may have taken the Nigeria Army by surprise as he did not even give the institution room to appoint his successor.
He simply took a bow and handed over to his Chief of Staff at the Directorate of army public relations, Colonel AA Yusuf.
What a fellow with an uncommon sense of comportment.
His farewell statement read
1. It is with utmost gratitude to Allah Subhanahu wa ta'ala, that I wish to inform you that with effect from Friday 8 February 2019, I will be proceeding on Terminal Leave, thus marking the end of my exciting and fulfilling career in the Nigerian Army.
I would like seize this opportunity to thank you all for your friendship, love, support and encouragement over the years that tremendously assisted me personally and repositioning the Directorate of Army Public Relations to the enviable height attained, thus far. I also wish to thank the Nigerian nation for the wonderful opportunity to serve the country and humanity in various capacities for over three decades.
2. I am leaving highly fulfilled after contributing my best to national development, the Nigerian Army, gaining great wealth of knowledge, experience, inestimable network of friends which I will treasure forever. I am thankful to the Nigerian Army also for giving me wonderful opportunities and work exposure to practice Public Relations to the point of being a Fellow of the prestigious Nigerian Institute of Public Relations (FNIPR), Member of the National Institute (mni), among other honours, awards and qualifications, as well as attaining the highest level of command of the Directorate of Army Public Relations twice.
4. Although a new Director has not been appointed yet, I am handing over to Colonel AA Yusuf, the Chief of Staff, Directorate of Army Public Relations. As I exit this noble profession voluntarily, I wish you all continued God's blessings, guidance and protection, amen. I will certainly miss you all and will continue to cherish the friendship and bond among us. I enjoin you to continue to support the military while discharging your professional duties.
5. Thank you and God bless you all.

His Impressive Profile:
General Usman was born on 2nd February 1965. He attended Kukasheka Primary School from 1973 to 1977 and Government Secondary School Kafanchan, Kaduna State from 1977 to 1982. S. K. Usman joined the Nigerian Army as recruit in 1983 and was posted to Headquarters 82 Division Army Public Relations, Enugu. After serving for four years, he gained admission into the School of General Studies of the Bayero University, Kano in 1987 for a one- year Pre-Degree programme.

On completion of his officer cadet training at the then Infantry Centre and School (ICS), Jaji, in July 1993. He was posted to the Headquarters of the Directorate of Army of Public Relations (DAPR), Lagos.

No sooner than he reported, he was immediately posted to Depot Nigerian Army and Nigerian Military School as Army Public Relations Officer (APRO) where he served for six years. In May 2002, he was posted to 20 Battalion Serti, located in Taraba State. The unit later moved to the United Nations Mission in Sierra Leone (UNAMSIL) as Nigerian Battalion 14 (NIBATT 14) where he served as Military Public Relations Officer (MPIO).

He also briefly acted as MPIO to Nigerian Contingent/Sector West of that mission. On return to Nigeria in November 2003, he was appointed, Acting Public Relations Officer to the then Chief of Army Staff where he served for five months. In 2004, he was appointed Acting General Staff Officer Grade one in charge of Training ( GSO1 Training) at the Headquarters of the Directorate of Army Public Relations (DAPR). While there, he also served as the Nigerian Army Website Master. Later that year, he was posted to the Nigerian Army Officers Wives Association ( NAOWA) National Secretariat and appointed Liaison Officer (LO-NAOWA). In September 2005, he was posted to the United Nations Mission in Ethiopia and Eritra ( UNMEE) and appointed Operations Officer at the Civil-Military Cooperation Coordination (CIMIC) G5 Cell. Colonel S. K.

Usman was later made the Chief of CIMIC (thus becoming the first Nigerian Army officer to hold such an appointment). On return in September 2006, he was posted to the Nigerian Army College of Logistics (NACOL), Lagos appointed College Public Relations Officer. He was again posted to the Office of the Chief of Army Staff and appointed Public Relations Officer (PRO-COAS), to the newly appointed Chief of Army Staff in June 2007.

Colonel Sani Kukasheka Usman attended various military and civil courses as well as seminars both here in Nigeria and abroad. These include Basic Arabic Course at the Nigerian Army School of Education (NASE), Ilorin in 1994; the United States of America Department of Defence organised seminar on "Military Communications with the Public in a Democratic Government" held at Hilton Hotel Abuja in 2001 where he was awarded Certificate of Excellence. He did his Junior Staff Course at the prestigious Armed Forces Command and Staff College, Jaji in 2002. While serving at UNAMSIL, he also attended the United Nations Institute for Training and Research (UNITAR) Programme on "Peacekeeping and International Conflict Resolution" 2003. He was also at the Kofi Annan International Peacekeeping Training Centre, Accr, Ghana in 2005 for "Media in Peace Operations Course." He also attended Estimate Process/Risk Management seminar held at the Nigerian Army College of Logistics, Lagos in 2006. In August 2010, he also attended the African Business School Johannesburg, South Africa, for a course on "Professionising Protocol, Information and Press Duties for Efficient and Effective Administration." S. K Usmab also attended a Seminar on "Innovations for International Development: Linking Good Ideas with Good Intensions" at San Jose, Costa Rica in November 2010. He also attended the United States of America based Peacekeeping Operations Training Institute (POTI) on " Global Terrorism", "Civil-Military Coordination" as well as "Principles and Guidelines for United Nations Peacekeeping" with impressive results. In addition to that, he went to the United Nations Mandated University for Peace, San Jose, Costa Rica where he obtained a Master of Arts Degree in Media, Peace and Conflicts Studies in 2011.S. K.Usman is a recipient of many Honours and Awards. These include Silver Jubilee Medal, Forces Service Star (FSS), United Nations Medal for Peace at Freetown, Sierra Leone in 2003 and Certificate of Merit by Naeem Muslim Youth Organisation of that country. Colonel S. K. Usman was also given a Certificate of Merit for Radio Production from the Headquarters of UNAMSIL. The United Nations Training Assistance Team (UNTAT) New York also awarded him a Certificate of Appreciation for excellent contribution to the success of first ever-Peacekeeping Course for Emerging Troops/ Police Contributing Countries to the United Nations in 2004. He was also a recipient of the Chief of Army Staff's Letter of Commendation in the same year and also a recipient of the Force Commander's Letter for outstanding performance as CIMIC officer at UNMEE and the United Nations Medal for Peace from that mission too. He was also awarded the best deligate for Excellent Performance at the Annual University for Peace Model United Nations Conference (UPMUNC 2011) where he served in the Security Council Committee. He has been awarded the nation's Golden Jubilee Medal. He is a member of the Nigerian Institute of Public Relations (NIPR) and the Society for Peace Studies and Practice (SPSP). He is also a member of the Board of Trustees of Foundation for Victims of Child Abuse.In addition to his General Operations Medal (GOM), he was recently awarded with the prestigious River Niger Star (RNS) for gallantry by the Army Council.S. K. Usman is happily Married to Hajiya Hadiza Sani Usman and blessed with children. He likes reading and listening to Music. He is widely travelled and has been to Benin Republic, Colombia, Costa Ric as, Djibouti, Egypt, Ethihiopia, Eritrea, Ghana, Liberia, Saudi Arabia, Sierra Leone, Sudan, United Arab Emirates, United Kingdom and the United States of America among others.

He got decorated as Brigadier General in December 2016.