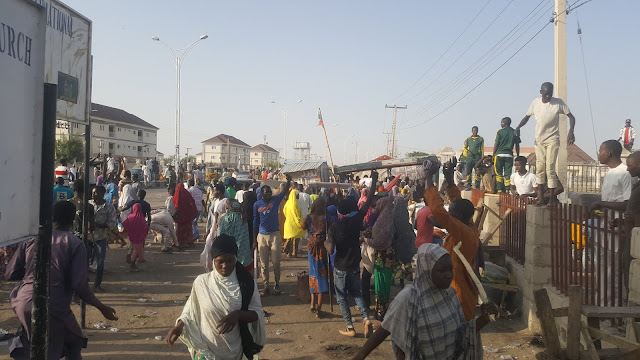 The IDPs said their bottled anger was broken on Monday when a team of the International Committee on Red Cross  came to distribute some food relief to them.
But before that is done, they needed to take a register of every IDP with a view to giving each a meal card.

The only data available was that of the State Emergency Management Agency (SEMA) and IOM. A record that seemed to have  been corrupted to favour junior officials who would sneak in relatives from outside the camp in order to  take rations undeserved.

But the camp officials said no direct distribution of the meal is allowed except through designated Bulamas (village heads) whose job is to identify faces on the record.

This suggestion was resisted by majority of the starving IDPs who accused the Bulamas of diversion of food rations and favouritism.

But the camp chiefs seem to have both their say and way. The ICRC team was asked to go if they would not things the way the leadership wanted.

As the Red Cross leaves the camp, the infuriated IDPs stormed out of the camp and went wild on protest.

The first casualties of their anger were the giant campaign posters mounted by various candidates of the political parties, which they did not waste time in pulling down.

Within a short while they took over the Kano-Maiduguri highway and barricaded the busy road.

Policemen and soldiers were deployed.
Lead of tear-gas canisters were freely released, but the women and children as well as young men would not bulge as they continue to chant, anti-government slogans.

Some unlucky vehicles that dared push through the barricades had their windscreen smashed. Others had to make uneasy u-turn to avoid the angst of the raging mob.

A physical brawl ensued between the vexing IDPs and some political thugs guarding campaign billboards that were destroyed by the former.
Soldiers intervened and the sideline fisticuff was cut short.

After about three hours of chaos, the IDPs listened to the plea of some senior military and police officers and they decided to retreat to the  camp to continue their protests.

Inside the camp was a perfect description of hell on earth. The sight of IDPs living in the most degrading condition confronts.
All ragged and sitting in the dusty outdoor; the camp promises to be a perfect breeding space for epidemics.
Underaged children were seen lying in the open under tents constructed with their mothers' wrappers which were strapped to tiny sticks - a makeshift shelter that promises no warmth, but direct contact with cold and mosquito bites at night.

"How dare they chase away the the Red Cross that came to give us food, for the first time in the past 30 days," an aged woman named Rakiya Alkali yelled.

"The government abandoned us after giving each person a measure of rice and bean in the first week of January.

"The officials and those who call themselves Bulamas are corrupt. They want everything to come their way so that they can corner them as usual. No! this will not happen."

For now the IDP camps was out of control and anger swells in the air.
But it must come to mind that the International Committee on Red Cross generosity is not a statutory duty but rather a largesse that comes as supererogatory function of the humanitarian organisation.

It is government that is duty bound to provide for the IDPs,  because it was not any fault of theirs that they are displaced.

The government must act fast in doing the needful. If one of the criteria of being in the IDP camps is having voters card as a means of identification, then, politicians must be careful; lest the IDPs wield their only power with anger.

As at the time of the incident officials of the Borno state government are out of town on campaign - a civic exercise that must be carried out to give credibility to any public office election. But it seems someone somewhere is forgetting the bigger politics that comes with the management of IDPs.

The Blogger has done detailed report on this story and is published in my mother medium, PREMIUM
TIMES. Click this link to read.