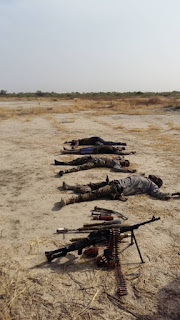 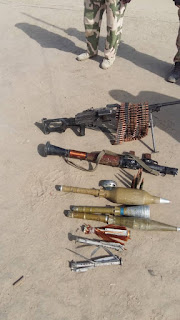 By Blogger
Report reaching Kareem's Pick Blog on Monday indicates that at least four Boko Haram fighters were killed during a fierce battle between government forces and organised armed group,Boko Haram in a border community north of Borno on Saturday.
A military statement issued by spokesman of the Operation Lafiya Dole,  a Counterinsurgency operations in northeast Nigeria, Onyema Nwachukwu, said three gallant soldiers sustained minor injuries.
Nwachukwu, an army Colonel, said the operation carried was executed by troops of the 118 and 119 Task Force Battalion of the Operation Lafiya Dole.
He said other members of the outlawed armed group fled with various degree of injuries.
The troops were able to recover some arms and ammunition abandoned by the insurgents.
Colonel Nwachukwu's statement reads:
"Troops of 118 and 119 Task Force Battalions of Operation LAFIYA DOLE in northern Borno have neutralised 4 Boko Haram terrorists in an encounter yesterday night at Mallam Fatori, a border town in Abadam Local Government Area of Borno state.
"On Saturday 2nd February 2019, a group of Boko Haram terrorists attempted to attack the town taking advantage of darkness but met their Waterloo in an encounter with gallant troops of 118 and 119 Task Force Battalions.
"The vigilant troops engaged the terrorists with heavy fire power and instantly despatched 4 of the attackers to the great beyond, while some of them escaped with gunshot wounds.
"The fleeing surviving terrorists abandoned some of their weapons and equipment which were recovered by the troops.
"The recovered items include, 1 Light Machine Gun, 1 Rocket Propelled Grenade 7 (RPG 7) tubes, 3 Rocket Propelled Grenade Bombs, 3 Rocket Propelled Grenade Chargers, a belt of 200 rounds of 7.62 mm (NATO type) ammunition, 5 rounds of 12.7mm ammunition and 4 Hand Grenades.
"The gallant troops are unrelenting and  are further exploiting their success, as they engage in hot pursuit of the fleeing insurgents.
"Three soldiers however sustained various injuries during the encounter. They are all in stable condition and receiving medical attention."
The Boko Haram insurgency which  has entered its 10 year has claimed the lives of many soldiers and thousands civilian while displacing nearly two million civilians, mostly women and children from their communities across the statea of Borno, Adamawa and Yobe.