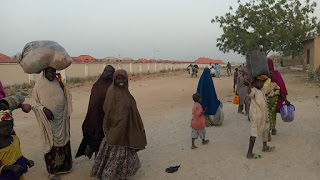 Over 400,000 registered voters in eight Borno local governments must vote in internally displaced persons (IDP) camps in order to partake in the general elections.
This figure is about 20 per cent of the total 2.3 million registered voters in the state.
Many of the 409,813 voters affected are already living in the IDP camps after they were displaced from their homes by the Boko Haram.
This was disclosed by the electoral commission, INEC, on Wednesday in Maiduguri, the Borno State capital.
In some of the eight local governments, the voting will be done in the IDP camps in the local government headquarters. In others, the voting will be done in IDP camps in local governments in and around Maiduguri.
The decision was taken based on the security situation in the Boko Haram ravaged communities, the electoral commission said.

Hundreds of thousands of people have been displaced in Borno by the Boko Haram insurgency since 2009.
According to the International Organisation for Migration (#IOM) "over 59,000 people have been displaced in the North-east, mainly in Borno State, since November 2018."
Since November, we have seen 59,200 displaced," IOM Nigeria's Chief of Mission, Frantz Celestin said, noting that in the last two years, "we have not seen that many people on the move."
The Borno INEC Resident Electoral Commissioner, Muhammed Ibrahim, gave this clarifications at an interactive session organised by the Nigeria Union of Journalists (NUJ) for election officials, civil society organisations, political parties and journalists.
He said the eight local government areas affected by INEC's decision are: Abadam, Guzamala, Marte, Dikwa, Gamboru-Ngala, Kukawa and Mobbar and Kalabalge.

"The 60, 678 registered voters of Kukawa will vote in Teacher's Village Maiduguri.
"The 44,705 registered voters from Mobbar will vote in Central Primary School in Damasak and Zanna Umurti Ajari Primary School.
"In Kalabalge, we have 43,489 registered voters. That of Kalabalge is still not certain because the stakeholders are still divided on where to hold the election. Some say it should be in Rann while others said it should be in Gamboru. I have told them that they should finalise on that by Friday," he said.
The REC also said the commission has engaged and trained 22,000 electoral officials that would be deployed to all the designated polling units in the state.