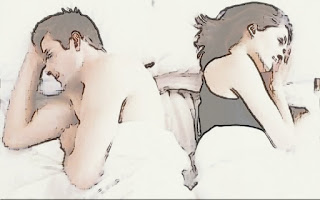 A newly wedded couple in Maiduguri, Borno state, have summarily ended their recent marriage on the first week because the bride, who is a chronic lesbian, won't allow sex.

The husband, names undisclosed, was shocked when he discovered that his darling bride, on whose wedding he spent so much fortune, turns out to be an unrepentant lesbian.

Sources familiar with the couple said the bride had insisted on no pre-marriage sex or romance before the elaborate wedding was consummated.

The sources told Kp Blog that the groom was  attracted to the bride by her seemingly religious and non- flirtatious disposition in her place of work. But it turned out a facade for her inner

"She is always seen in decent clothing and never in company of male admirers or toasters and she prays like a devout," said a source who wouldn't want to be named as doing so will expose identity of the couple.

The source said the groom who looked forward to his wedding night spent a fortune to organise what almost qualified  for a mini society wedding.

On the wedding day the group and his friend were shocked to see the kind of big-girls the bride had  as her guests.

Another source said "while the groom and his guys were battling to spray N200  and N100 notes of the Nigerian  currency, the bride and her high class friends sprayed mints of N1000 and N500 notes.

After the wedding party, the friends who followed the tradition of northern Nigeria had to accompany the bride to her new home where they exclusively spent three nights. The groom was practically asked to stay clear of the house until the day they were leaving.

Trouble started when the groom finally had free access to meet his beautiful bride. Ordinarily, that moment is usually a glorious one for new couples. But alas, the groom was welcomed with the coldest reception he has ever seen.

The hug was dry and kisses were tactically avoided.

In bed, the bride was not a pleasant sight to behold. For two days the couple turned their well furnished bedroom to a wrestling ring as the groom battled to have his wife.

Frustrated and angry, the groom picked his phone to report the matter to one of the bride's best friends. It was then he received the shock of his life.

He was simply told he has just married an unrepentant lesbian. A hater of male.

"So you didn't know who she is before you signed to marry her?" was the question he was asked on phone.

Shocked and heart broken, the groom returned to his bride and she expressed no remorse in confirming what her friend just told her husband.

That of course was the end of the marriage. The groom issued a verbal but irreversible divorce popularly known in Hausa as saki uku. The bride simply walked out of the house.

This story may come as a surprise  to some people, but it is just a representation of a saddening reality in our society today.

This post is not intended to condemn the chosen sexuality of people. No. But it is just an exposè of what our society is made of today and also for couples to ensure they carry out investigation with due diligence on whomever they are courting for marriage.

It is also a call for those who are of the #LGBT world to show honesty in their romance.

It is decent for a #lesbian, #gay #bisexual and #transgender to honestly declare their state of being -  natural or adopted - to whomever that is straight and wanting to get married to them so that there won't be emotional trauma for inadvertent suitors.

In Nigeria, a law that forbids display of being #LGBT has been enforced by the National Assembly. And such law has punishment for violators.