It was the most petrifying incident that may have happened in Borno state since 2011 when Boko Haram started carrying out high profile attacks of very public officials.

And it perhaps may also be one of the most needless trips as well. But it has happened.

The convoy of Borno state governor, Kashim Shettima, and his party's flag bearer, Professor Babagana Umara, was on the way to Ngala, a border town, 140km away from Maiduguri, where they hoped to convince voters there to vote for their popular party come Saturday election.

The convoy did not leave Maiduguri early enough. When they got to Dikwa, soldiers there reportedly barred them from advancing because in their daily tradition, 6pm is a curfew time for road users. And Boko Haram attackers usually haunt the road at about that time.

But the convoy insisted on proceeding. After a heated argument, the politicians proved they know the terrain better than the soldiers and they couldn't afford to go back to Maiduguri - not after they've made all plans to be in their destination that evening.

Maybe it is an ego thing to say they couldn't make it to Ngala. Maybe it was sheer act of fate that it must happen. But it was silly.

Some persons reading this blog post or narrating the incident, might say haka ne Allah ya kaddara (meaning that's the way God destined it to happen) - a commonly deployed excuse to justify even an avoidable act of folly.

The soldiers lifted their barricade and the convoy moved on in the darkening light of the day.

After Dikwa, the highway is untarred and vehicles have to move in the thick sheet of dust. In that situation, visibility is less than 50 percent.

It was that dusty moment that the Boko Haram attackers who were waiting by the road side took advantage of and sneaked into the convoy by the middle.

Everyone thought the two gun trucks actually belonged to Nigerian soldiers helping out on escort mission. Some of the civillian-JTF operàtives said they even waved at them as they drove in their midst for about 5km before they began to open fire on the vehicles behind them.

The rest that happened is now history.

Five persons, including a soldier,lost their lives. Many persons are still missing - some said they may have been abducted and taken away in the about ten abandoned vehicles that Boko Haram took.

Though the larger convoy had proceeded and had even carried on with the campaign, the dead are by now surely forgotten; now counted amongst the statistics of Boko Haram casualty figures.

But the affected berieved  families are now left with days, or may be weeks, or months or years of grief.

Well, who am I not to say haka be Allah ya kaddara. If I cannot beat them in my logic of always exercising caution first  before asking for the face of God, at least I should also join them in saying that's how God destined it to happen.

May the soul of those who passed on be forgiven and find rest in the peaceful abode of God. 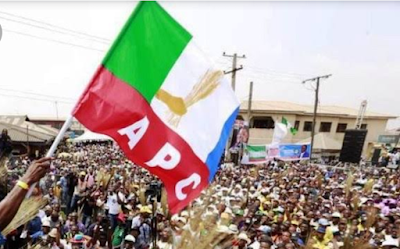 But Kp Blog's main concern is that if trained members of the civillian-JTF cannot identify Boko Haram that are armed with with two gun trucks boldly joining a moving convoy, how much can they do when the same deadly group chose to invade a campaign gathering or a convoy while disguising as civilians or even as politicians and driving in vehicles camouflaged as campaign vehicles??

Political campaigns and are constitutionally allowed activities that must take place before any credible election. But in a hostile situations like our in Borno,  party politicians must exercise caution and work with the security agencies  for protection. And they should avoid dangerous locations. For the person that will win must win; because that is how God has destined it would happen.