The Presidential Committee on the #Northeast Initiative (#PCNI), has on Thursday said it has distributed packages of study material to a total number of 12, 553 indigent children in various public schools in Borno state.
The Committee had earmarked 15, 553 school children to be given the study kits.
The study materials which are packaged in an assorted schoolbag comprised exercise books, text books, writing kits, launch box, water bottle and a unit of chargeable torch.
Each children in about 24 public primary and secondary schools was to benefit from the gesture.
The Head of Media and communication for PCNI, Alkassim Abdulkadir, informed journalists that the gesture was a project under Committee’s education support program for Northeast.
He said the entire distribution was meant to assist indigent students and pupils across the northeast states that are affected by the insurgency.
"For Borno state, a select 15,000 children were targeted because as an intervention agency it is impossible for us to provide for each and every person in need.
We targeted 15,000 study kits for the same number of children across selected schools. We later observed that some schools have more number of schools compared to others. So, in schools where there are large number of children, we earmark certain sizeable number of beneficiaries; in those with fewer students we give everyone.
He said so far a total of 12, 553 bags have been distributed, 2,447 bags are yet to be distributed.
He said the election break given to schools in Borno last week halted the distribution of the remaining bags of study material.
Alleged Diversion?
Early this week, an allegation went viral that the much celebrated free distribution of study kits have been diverted by some officials working with the PCNI. The allegation, which was strongly denied by the PCNI, had led almost led to protest in one of the benefitting schools in Maiduguri.
Responding to the alleged diversion scandal, Mr. Abdulkadir described the claim as "a total falsehood." 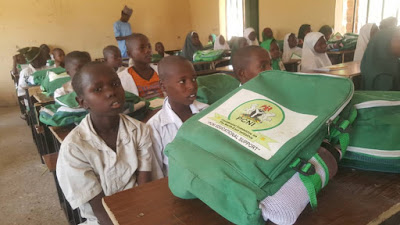 Conducting journalists round the PCNI stores to ascertain claims made to refute the allegation of diversion, the PCNI head of administration, Amina Maibe, said what was mistaken for diversion was a misunderstanding between the benefitting school teachers and the personnel of PCNI.
"We were also shocked to see it on the social media and in the internet that bags and study material meant for students were diverted," she said.
"When we came up with the idea for this intervention, we contacted the state ministry of education and state universal basic education board, who gave us the list of the schools.
"There is no way these learning kits can be diverted because, we carried out the distribution together with officials from the state ministry of education and SUBEB.
She said alongside the study kits for children, all teachers of the benefiting schools are also given a bag that contains teaching kits as well.
“The misunderstanding happened in Government College,” she said.
“Our pattern of distribution was to first give out the study kits to the children through the help of the teachers and when the kids have all gotten theirs and left, then we handed the teachers theirs.
“But on that fateful day we were to make distribution in two schools, which are Government College Maiduguri and Yerwa Girls College.
“When the distribution was going on in Government College and it was almost done, we decided to send some of our staffers ahead to Yerwa Girls College which is just nearby. And the only vehicle that can convey the staff to the next school was the one containing the bags for the teachers. When they saw the vehicle leaving they quickly raised false alarm that it was being diverted.
“We had to explain to them that the driver was just going to drop off the staff in the next school and return. When we noticed that they were not willing to yield we had to wait distribute the over 140 bags to them before we left.

“It was later we got to find out that the teachers were so agitated because they had a false impression that each bag contains a laptop to be distributed to them,” said Mrs Maibe.