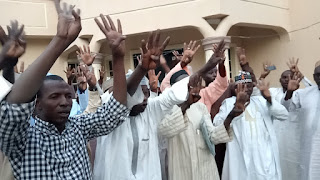 By Blogger
When it comes to politics one cannot rule out possibility. The situation is not different even in places like Borno state where politics is not only played as a game but as a way of life.
Politicians don't easily say die even when all public opinions believe they gone.
To them there is always a striking opportunity. They would wait and endure the torture but looking out for the best time to play their last card.
Or how best can one describe a situation where 15 ward chairmen of the People Democratic Party (PDP)  in Maiduguri Metropolitan Council of Borno state decided to dump their party on Friday afternoon as they defected to the ruling All Progressives Congress (APC).
This defectors were chiefts of their party at the ward level. They participated in rallies and hailed their candidates but on the eve of a crucial election, they decided to show where their hearts has been.
The defectors created some air confusion when they stormed  Government House Maiduguri to declare their support for the ruling Party.
The PDP officials' defection came at a time the party is about to enter a crucial election in which two of their strongest candidates are vying for Senatorial and House of Reps seat in the same constitiency.
Anyone that knows the configuration and dynamics of Borno central Senatorial district, would better understand the gravity of 15 ward chairmen deserting a party hours to an election.
Maiduguri is the capital of Borno state, the headquarters of Maiduguri metropolitan council, the headquarters of Maiduguri metropolitan federal constituency, and the headquarters of Borno central Senatorial district.
It also has largest political ward in Nigeria. Maisandari ward.
So any act of politics played here is taken very seriously.
Political pundits in Borno state said no governor wins an election without the support of MMC.
It is the most politically charged local government and town in Borno state.
The 15 defecting ward chairmen said they were leaving the PDP because the party has not offered them any convincing argument that it would do better than what the ruling APC had done for the state in the past 3 years and nine months.
Kabiru Babagana, the  chairman of Bolori II Ward spokesman on behalf of the 15 ward chairmen.
"We the 15 ward chairmen and our secretaries have decided to leave the PDP because the leadership has always failed us when it comes to times election," said Mr Babagana.
"Besides, the ruling APC has done so much for Borno state since 2015. The APC controlled  federal government  has not only helped us to decimate Boko Haram, but also helped to rebuild our schools, hospitals and markets.
"After thorough consultation with our supporters in the 15 wards, we concluded that posterity will not judge us kindly if we continue to oppose a government that has done so much for us and brought succor to  our people."
Another speaker, Mukhtar Sheriff, who is the chairman Mafoni Ward said they left the party because the government in Borno state has left them with no option.
"We are humbled by the achievements of governor Kashim Shettima, who despite our state of insecurity has done his best to keep our state running," said Mr. Sheriff.
"And we have decided to join him and his Governorship candidate so that we can all build a better Borno state.
"It is for that reason that we decided to leave the PDP with it's baggage of controversy to join the ruling APC and support all it's candidates from the president down to House of Assembly here in Maiduguri."
Receiving the defectors on behalf of the Borno state the current member of the federal House of Representatives, Kadiri Rahis, commended the defectors for taking a bold step.
Mr Rahis said the governor appreciated their decision to join the party even as he urged them to come out en mass to vote for the party in the Saturday and subsequent elections.
He also advise them to vote quitely and avoid any act of violence.