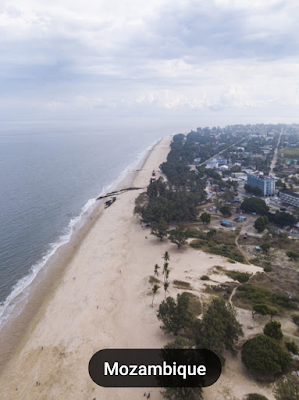 At least 48 people have died following Cyclone Idai’s landfall in Mozambique, according to unverified media reports quoted by the United Nations office for the Coordination of Humanitarian Affairs (UNOCHA).

Reports said the death toll is expected to rise in the days ahead as further information becomes available.
Kareem's Pick Blog had earlier reported that the impact of the Mozambique tempest, christened #CycloneIdai, had caused a devastating impact on East African country's neighbours with Zimbabwe recording at least 30 death and over a hundred persons missing as the flooding washes through it's coastal areas.
The latest update by UNOCHA indicated that
"there has been significant damage to houses in Beira City – which
has an estimated population of more than half a million people -
according to initial information.
"Health and education facilities have also been damaged, with preliminary reports indicating that the Beira Central Hospital emergency room has been flooded and is without power, while much of the roof of the building has collapsed. Power lines and trees are reportedly down in
many parts of the city.
"In addition, it has been reported that areas outside of the city may have been even more intensely
impacted by the storm.
Massive destruction of livestock and planted crops has been reported. As this damage is occurring just before the main harvest season, it could exacerbate food insecurity in the region.
"The Government has issued a Red Alert for flooding along the River Buzi. The alert highlights the high risk of floods in
Buzi and Pungoé and the potential for Buzu, Nhamatanda, Dondo, Muanza and Chinababava to be affected. Heavy rains
are forecast for the next 24 hours, including in areas already hit hard by the trajectory of the Cyclone Idai weather system
during and after landfall."
What the Government of Mozambique Doing
The report said "President of Mozambique, Filipe Nyusi, is visiting multiple flood and cyclone-affected areas to meet with people
impacted, including in the districts of Dondo and Nhamatanda in Sofala, Chinde and Maganja da Costa in Zambezia, the
provincial capital and districts of Moatize and Changara in Tete, and the city of Chimoio in Manica, according to media
reports.
"He is traveling with multiple senior government officials, including the Minister of Public Works, Housing and
Water Resources, João Machatine, and the governors of the provinces of Sofala, Zambezia, Tete and Manica, as well as
the Director of the National Institute for Disaster Management (INGC), amongst others.
"In Beira, the National Institute for Disaster Management (INGC) has set up its Center of Operations in a WFP-provided
Wikhall at the airport, with inter-agency coordination currently being facilitated by WFP and the NGO Consortium
(COSACA).
"Telecoms Sans Frontiers has deployed a team to Beira and is establishing connectivity for the operations
centre.
In Beira Central Hospital, remaining health workers are working shifts in
order to treat emergency patients as best they can.
Mozambique did has a history with Cyclone
Investigation by ireveals that #CycloneIdai is not Mozambique's first experience with such deadly storms.
According to Wikipedia, the storm called Cyclone Favio was the first known tropical cyclone that passed south of Madagascar to strike Africa as an intense tropical cyclone.
Early on February 11, 2007, a zone of disturbed weather formed east of Madagascar. Four days later, Favio was named as intensified to a moderate tropical storm while moving southwest.
On February 18, the storm was upgraded into a severe tropical storm. Then, it turned west in the general direction of Mozambique. Continuing to intensify, Favio was upgraded to a tropical cyclone early on February 19. Subsequently, the storm began to undergo rapid deepening; the small storm reached intense tropical cyclone status the next day before peaking in intensity.
However, the cyclone had weakened somewhat prior to making landfall on February 22 in the Inhambane Province in Mozambique. It rapidly weakened over land and dissipated the next day.