The United Nations is reporting that at least 21 persons have been killed and nearly 70 injured in the cyclone that hit some parts of Mozambique on Thursday.

In a flash report issued today by UN's Office for the Coordination of Humanitarian Affairs (OCHA), the tropical
Cyclone Idai’s landfall on city of Beira, in
Sofala Province has cut off communication in  that part of Mozambique.

The flash update says vote"the full impact of the cyclone is yet to be established."

"However, initial reports indicate loss of life and significant damage to
infrastructure in Beira and surrounding areas. At least 21 deaths and more than 70 injuries have been reported in Sofala  Province, according to preliminary reports from State
broadcaster Radio Moçambique.

Meanwhile, the assessment
team on the ground reports significant numbers of destroyed
houses, missing roofs and fallen trees. WFP’s warehouses were
also damaged during the cyclone. The Beira airport has been
temporarily closed. 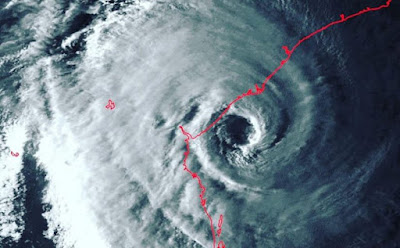 In Zambézia Province, the cyclone impacted Chinde District,
where 1,192 people were affected and 84 houses flooded. In Manica Province, 127 houses, 36 classrooms and two
health units were damaged or destroyed, and severe damage on crops has been reported.
Five districts in Manica do not have electricity due to the downfall of 61 electricity poles.

In Inhambane province, at least 39 houses were destroyed, 10
classrooms and one health unit affected in the districts of Govuro and Vilankulos.

The report said the President of Mozambique, Filipe Nyusi, addressed the media on 15 March, explaining that the Mozambican
government is “doing all we can to ensure that the situation returns to normal” and welcoming the international solidarity
shown in the aftermath of the cyclone.

Prior to Cyclone Idai making landfall, the weather system had already affected at least 141,000 people, with 66 deaths
recorded and 111 people injured, according to media reports quoting government officials.

More than 17,100 people are estimated to be displaced in Zambezia and Tete, with 10 transit centres established in Zambezia and two in Tete.
The strength of the storm has diminished as it has crossed land. However, it has continued to bring strong winds and
heavy rains as it has made its way across central Mozambique and into eastern Zimbabwe.

The Mozambican National
Institute of Meteorology issued an alert on 16 March 2019 of heavy rains and strong winds in the provinces of Sofala,
Manica, Tete, Inhambane and Gaza.

The government of Mozambique is said to have taken preemptive measures ahead the fall of the tropical cyclone. And the measures taken against the forewarned natural disaster has in a way eased the  rescue operations.