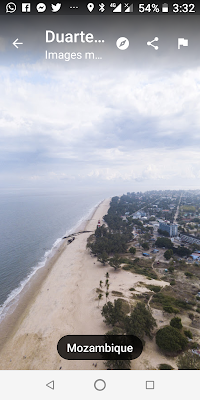 The United Nations Office for the Coordination of Humanitarian Affairs (UNOCHA) has in a flash update, Sunday afternoon, said at least 30 persons have been confirmed death and over 100 missing as the landfall caused by tropical cyclone in Mozambique on Thursday  hit  Zimbabwe.
Kareems Pick Blog had earlier reported that 21 deaths and over 70 injured as the circling wild rainstorm tore through coastal areas of Mozambique.
According to the latest UNOCHA update, the Mozambique tempest called Cyclone Idai impact is already being felt in the neighboring East African country of Zimbabwe. 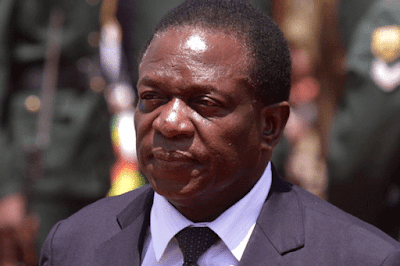 Already, the President of Zimbabwe, Emmerson Mnangagwa has declared the impact of Cyclone Idai has put his country "in a state of disaster."
The Flash Update said "the Cyclone Idai weather system hit eastern Zimbabwe on 15 and
16 March, with Chimanimani and Chipinge districts in Manicaland
Province hardest-hit."
"At least 31 deaths have been reported and over 100 people are
missing."
"The town of Chimanimani has reportedly been cut-off by floods and
landslides."
The UNOCHA Flash Update reads: 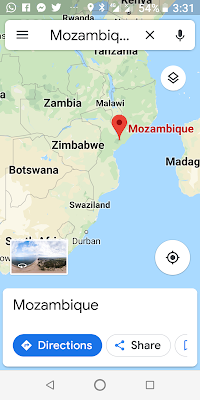 "Following its landfall in Mozambique on 14 March, Cyclone Idai
continued across land as a Tropical Storm and hit eastern Zimbabwe with heavy rains and strong winds. The storm
caused high winds and heavy precipitation in Chimanimani and Chipinge districts causing riverine and flash flooding and
subsequent deaths, destruction of livelihoods and properties.
"Areas within the pathway of Cyclone Idai’s weather system include Manicaland, Mashonaland East, Mashonaland
Central, Mashonaland West, and parts of Masvingo and Midlands provinces, according to the Metrological Services
Department. Its effects are also projected to be felt in Harare Metropolitan and the Matabeleland provinces.
"Chimanimani and Chipinge districts have been hardest-hit, with riverine and flash flooding reported. The town of Chimanimani was
reportedly cut off after bridges across Mvumvumvu River (Matsororo and Muusha bridges) along the Mutare-Chimanimani
Highway were washed away and other sections of road were blocked by fallen trees and landslides.
"Power supply in  many areas is affected.
"At least 31 deaths have been reported and over 100 people are missing, according to preliminary information. The death
toll may rise in the days ahead as further information regarding the storm’s impact becomes available.
At least 1,600 households (8,000 to 9,600 people) have been affected in Chimanimani, Chipinge, Nyanga and Mutare
districts, Manicaland Province, as a result of flooding and landslides, according to initial information. Based on census data, 48 per cent of those affected are estimated to be children and 52 per cent are estimated to be women.
In Tongogara Refugee Camp, nearly 300 people have been affected, with 49 houses damaged. Considerable damage to
properties, livelihoods and infrastructure has also been reported in the districts in the storm’s path."
What the Zimbabwean government is doing
The President of Zimbabwe, Emmerson Mnangagwa, has declared the impact of Cyclone Idai a state of disaster.
The Government-led response is being coordinated by the Department of Civil Protection (DCP) through the National,
Provincial and District Civil Protection Committees, with support from humanitarian partners. A sub-national flood command centre has been set up to facilitate real-time coordination of the response and Civil Protection Committees are
conducting rapid needs assessments in the affected areas.
The military is supporting search and rescue operations as well as evacuation of at-risk communities. However, access and logistics are challenging due to the prevailing weather conditions. Mass flood awareness campaigns are ongoing through various media platforms and SMS.
Humanitarian partners had pre-positioned non-food and food items in at-risk provinces, including: temporary shelters, WASH non-food items, Child Protection-related supplies, mama kits and food. There is an ongoing health and
nutrition intervention in Chimanimani district supported by the Health Development Fund (HDF). The Logistics Sector has
been activated, led by WFP, to enable rapid response in affected areas.
Arrangements are underway to dispatch the first
truck with essential supplies by 18 March.