These group of four Adamawa girls are not of the voting age.

But my camera lense  caught them gathered around a published result sheet for Governorship Election pasted by the Independent National Electoral Commission  (INEC) right opposite the gate of Adamawa State Government House in Jimeta-Yola.

Of course they did not participate in the polls because they are just 15, 14, 12 and 8 years old.

But they came out to idle around one of their big aunties who sold cold drink for voters at the polling unit.

After the electoral officials had left, the girls approached the INEC results sheet and busied themselves analysing the performance of all Candidates as indicated on the result sheet

And they understand what the election was all about.

They are smart girls. Most Adamawa girls, I just learned, are. 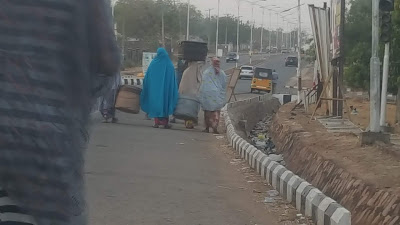 Veiled in their overflowing hijjabs or simply dressed in a skirt and blouse - you don't underestimate their brilliance.

"So sad for Governor Bindow," one of them said allowed. "I wonder why he was defeated here even though he is a nice governor who has turned Jimeta to London for us."

"But they said he did not help those in the villages that needed his support, thats why they wanted him out," the 8 years old said.

The 4 girls kept on chattering over the issue of the day without really minding my presence. And I was marvelled by their not too naive sense of appreciating what is happening in the larger political space.

They never understand why Governor Bindow suffers such political tsunami. They never knew the governor naived when he was supposed to display wit. He chose to be Adamawa's urban hero and scored zero in the rural heartland.

I can say Adamawa girls' story is beyond the tales told by their parents. It is way beyond that deliberate distortion. Its not about farmers and Fulani herdsmen. It is just an untold stories of brilliance, courageous and elegant womenfolk - the damsels who would not settle for the traditional second fiddle and backbenchers role.

They are just very smart.

A female politician, Aisha Dahiru Binani, had just won the Adamawa Central Senatorial Seat for the APC. She beat a league of male politician to emerge winner.

Mrs Dahiru may at the end of the election days turn out to be the only highest political office holder of APC in the land of Lamido, if the  icerberg-bound political ship of a sinking governor Bindow is not salvaged.

Senator-elect Aisha Dahiru, is just the manufestation of those  4 lil girls' inherent dreams.
A resilient dream that defy mundane norms that has shelled the true nature of an Adamawa girl...beautiful, gorgeuos and daring; just like Kogi ladies.