The Boko Haram insurgency has already entered it's tenth year since a stonewalled group of Islamic extremists in Borno state  picked up arms against the state and those they consider infidels.
The conflict has since 2009, when it started, claimed about 200, 000 lives on both sides of the war.
According to the UNHCR latest data "a total of some 2.5 million people are displaced across the Lake Chad region including more than 1.8 million inside Nigeria." 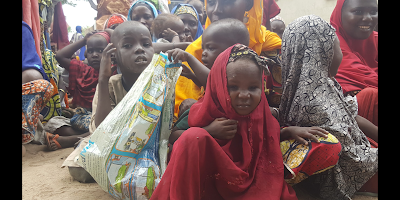 Stories have been told by the media of attacks by Boko Haram destroying communities, displacing women and children and on how their lives were reduced to the  inconveniences of the IDP camps.
But there are many gaps of unreported detail left out  by the mainstream media. The stories of survival; of life after rescue from Boko Haram dens; of thousands of children orphaned by the conflict, and of women widowed before their prime.
Little has been reported or heard of these poor folk's resilience and determination to move on despite losing everything.
#PAGEInitiative, a Nigerian non-governmental organization, had last year produced a filmed documentary that details the survival stories of victims of the Boko Haram conflict.
The film features the stories of women switching roles with their husbands in their collective quest to eke out a living after being #Uprooted from their comfort zones.
The one hour film, titled #Uprooted, has since been screened in various camps for internally dispalced persons by the PAGED Initiative in different locations within the northeast region.
The idea of PAGED Initiative is to use the film to inspire the culture of resilience amongst the victims as well as encourage them to also  share their experiences before, during and after displacement.
Under it's program,  "Reporting Gender for Inclusive Development", a project supported by #FreePress, Paged Initiative also involves a select creme of journalists across all genres of the media to interact with the targeted victim in a post-film-screening session with a view to churning out compelling stories that have not been told.


In Kusheri and Jiddari areas of Maiduguri where #Uprooted is currently being screened, an excited audience of displaced men, women and youth were, at the end of the screening, encouraged and motivated by the stories of the film's character, to share their own experiences. Their shared stories are as well not only emotive but heart-breaking.
Theses stories will in due course be shared on this platform.
Ummi Bukar, the Managing Director of PAGED Initiative,  said the film is to be used as a media for advocacy tool that can help in providing a platform to the under-represented members of the society, especially those in  places of conflict, where they can have a voice to effectively tell their untold stories through the media.
PAGED, is an acronym for
Participatory Communication for Gender Development.