marriage had recently re-embraced Islam and decided to put a stop to her controversial YouTube videos.

Going by her name, Muneerat Abdulsalam,  no one doubts her Islamic background. But the unapologetic sex educationist, had for some times of her life, parted ways with her religion due to some personal reasons which she once  attempted to explain in one of her YouTube posts.

Her video content, though had generated a lot of followers for her YouTube channel, also placed her on a negative light in the eyes of many northerners - both Muslims and Christians.

Some Muslims in the North felt she was giving Islam a negative representation because her names suggested she is a born Muslim lady.

But Muneerat who was unapologetic with the way she used profane words and vulgarity to pass message,  like mentioning the private parts with it's real name, and almost practical in her description of how man and woman could get the best sexual satisfaction, insisted she was doing the public a greater good and saving marriages.

According to her she has used her YouTube message to save many homes that were hitherto  threatened by lack of active romance which leads to unexciting relationships and divorce from collapsing.

The perfume which she called Humran Lumancy has become a hot cake and is being ordered by people from within and outside Nigeria.

Despite the public backlash, from the northern establishment, Muneerat wouldn't bulge as she continued to broadcast her channel and occasionally flaunt her natural heavy breasts endowments.

Her refusal to put on hijab to cover her head while putting on skimpy tops that almost reveal her nudity in front of the camera left her with many critics.  Though her fans see those condemning her as hypocrites.

While she continued to receive threats from unknown people, Muneerat said no one could stop her from doing what places food on her table.

And she had threatened to sue whoever tries to harrass her or if pushed to the wall, she once threatened to invoke the wrath of her native country home's gods called "Garmarama", upon who ever cross her path.

Hell was almost let lose on her as Northern critics accused her of deliberate attempt to  corrupt their women and girls.

Since then, it seemed a turning point for her. Though Kareem's Pick Blog has not independently verified the rumor, it was said that some top Northern leaders reached out to her and was able to logically made her understand that she can still use her YouTube fame to do something more rewarding, less controversial and still make money doing so.

In a different video, Muneerat was featured at the National Mosque Abuja where she went to rebaptize as a born again Muslim and later granted interview to the press explaining why she returned to her religion and turned a new leaf in her public engagement.

She broke in tears as she was struck with emotion while speaking to journalists.

The Lumancy Queen said she is going to continue her YouTube business, though in a more positive light, to empower women and to help the less privileged.

Now dressed in decent  attires without anyone having to ogle at her exposed endowments, Muneerat speaks more about good marriage, genotype testing before marriage, dangers of drugs abuse and abortions etc.

However Muneerat is perceived, she will for a long time be remembered as one Northern Nigerian woman who defied instituted taboos to revolutionize how people can use the social media for self actualization.

An overzealous Vlogger recently dubbed her PROSTITUTE. A hate speech that was generally condemned by decent Nigerians who insisted no one has the right to judge her.

Hate her or like her, Muneerat may have assisted thousands of Northern women to better their sex lives and safeguard their once crumbling marriages.

Sadly, none of her female fans ever come out to defend her when the North wanted to eat her up.

One Borno picture that tells so much about vanity of power 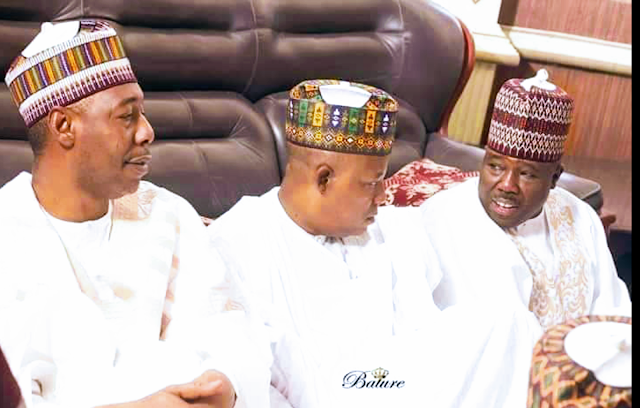 By Abdulkareem Haruna
"Anyone who has lost something they once thought was theirs foreve,  finally comes to realise that nothing really belongs to them."
Or is there any maxim , better than this  quote by Paulo Coelho that could  aptly describe the lives of those three Borno governors in the picture above?
From right to left, are men whom God favored to be governors of Borno state.
One has long served his time and it lasted 8 years.

The second man has only 24 days left to end his constitutionally allowed 8 years tenure. The third man has 23 days  to start his own tenure as Governor of Borno state.
It is indeed one of the most beautiful photographs I have seen in recent times.
A picture that tells one a humbling story of how beautiful, sweet and some times deceptive life could be especially if it places you on the spotlight of power.
I love the picture because it tells a tale of the past the present and future of Borno state.
People, not necessarily governors or presiden…
Read more